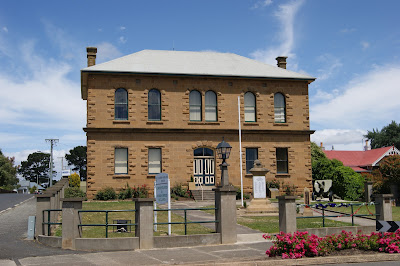 It was at a meeting of the council on the 1st September 1877 that a decision was taken to apply for the site on which the gaol yards and cells at Oatlands were standing for the purpose of erecting a new Oatlands Town Hall. It was decided that should the application be successful, a special meeting of council would be called. However, the first choice site was not available and at the following October meeting of council, Coucillor R.D.Lord and the Council Warden J.R.Roe were empowered to find a suitable site on which to build the new Town Hall. It was these two gentlemen that ultimately chose the site on which the building stands today. 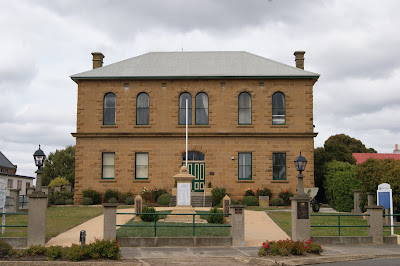 The issue of the Town Hall does not appear in the council minutes again until February 1878 when it was decided that the amount to be raised for the purchase of the land and the construction of the building would 1800 pounds. At the following meeting in April, the Warden was empowered to communicate with William Henry Lord, Architect, with a view to drawing up plans for the proposed building. 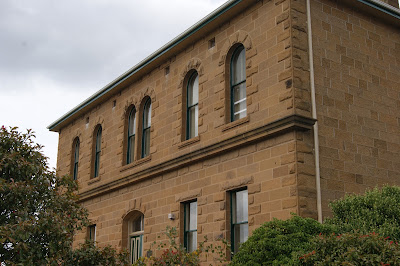 By the 1st May 1880, things were starting to take shape on paper as the council were officially shown the plans by the architect. The council were evidently impressed and no major alterations were requested. The final plans were then readied and presented again to council on 5th June 1880, with final specifications readied by the following Tuesday at which time the architect placed the advertisement for tenders. This was duly done in “The Mercury” of 23rd June 1880. 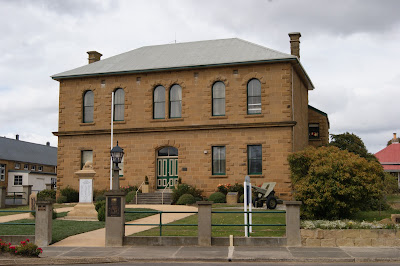 6 tenders were eventually received but all were considered to be too high and it was decided to ask the architect to redraw the plans and that a special meeting of council would consider fresh tenders in accordance with the altered plans. Three fresh tenders were received but still the council was not satisfied with the tenders. The council had raised 1800 pounds to buy the land and build their Town Hall, had paid somewhere in the vicinity of 600 pounds for the land and so the Town Hall had to be built for 1200 pounds and the tenders had been significantly higher. 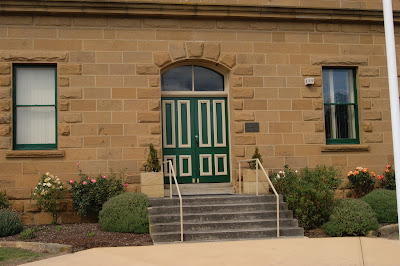 There appears to have been a fair bit of discussion back and forth between the council, the architect and the tenderers regarding the costs and further alterations. During this process, a Mr W. Duncan appeared as the front runner to have his tender accepted and on 20th July the Warden met with the architect and if the architect approved of suggested alterations, the council would accept Duncan’s tender. 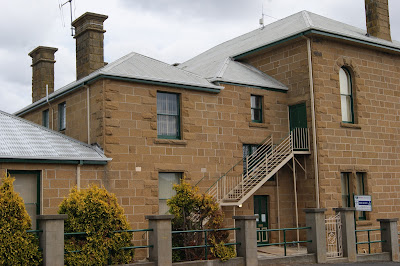 The architect then sat down and prepared altered plans that were presented to council and on 18th September 1880, a letter was received from the architect advising the council to accept Duncan’s tender. Now, after 3 years and 1 month after a new Town Hall was first mooted, the council started the ball rolling and the contract with Duncan for the erection of the Town Hall was signed on 2nd October 1880. 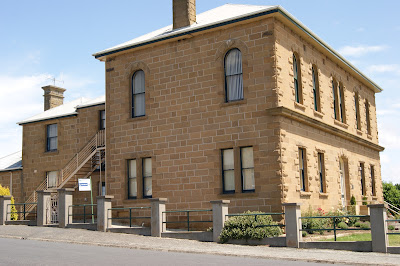 In his contract, Duncan stated that he would complete the construction of the building within 9 months and so on 9th June 1881, he wrote to the Council Clerk applying for the balance of the money owing him on the completion of the building. Finally after some defects had been rectified by the contractor, the brand new Oatlands Town Hall was officially opened at 12 noon on Saturday 17th September 1881. It continues to serve its community to this day. 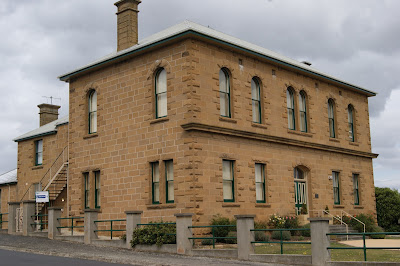 
“A History Of Oatlands” – J.S.Weeding 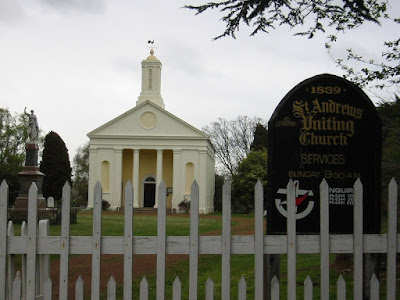 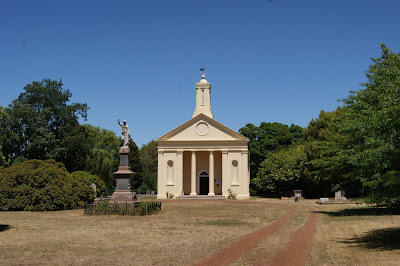 Built 1839 – 40, largely through the efforts of the Rev Robert Russell, this church is one of the most important colonial buildings in in that it has retained its quality without significant change to its external appearance or its outstanding interior. The Rev Russell was the first Presbyterian minister in Evandale having arrived in the district in 1838. 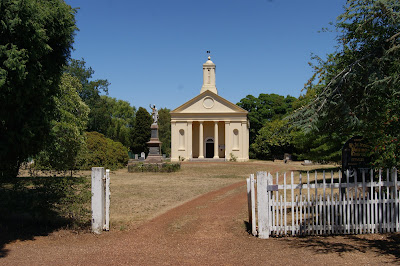 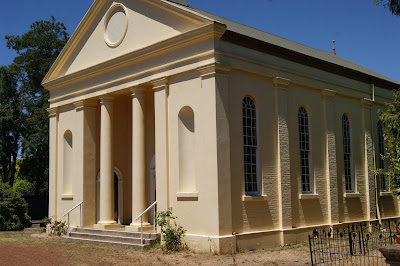 The congregation raised 400 pounds towards the cost of the construction and the government of the day contributed 600 pounds. The final cost of construction was approx 1500 pounds and no one knows where the extra money came from. Russell is said to have supervised the construction himself, having sought a design from within the colony. No architect has ever been identified and the finished structure no other building in the Australian colonies. The form of the building echoes that of a Roman temple but with a steeper roof and the addition of a bell turret. The style of the building is classified as a Greek Revival. 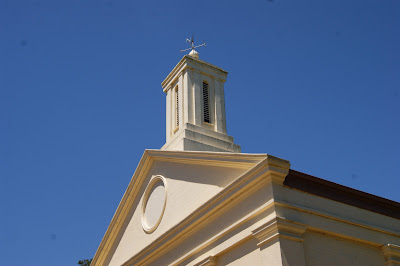 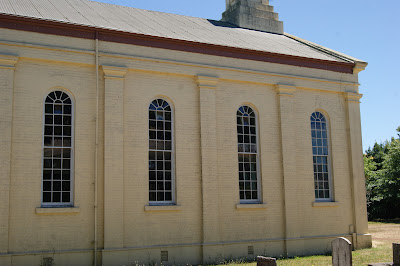 The main structure is of bricks that had been made locally to line the tunnel that was intended to carry water from the below the town to an aquaduct that would carry the water to Launceston. After a number of accidents among the convicts employed in the tunnel construction, the project was abandoned. The brickwork, now painted, is exposed on the back and side walls but stuccoed on the front and the turret. 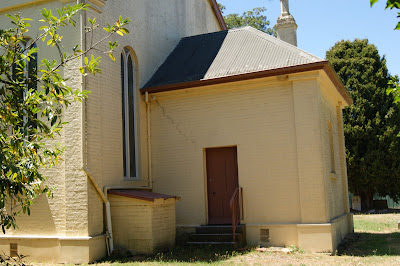 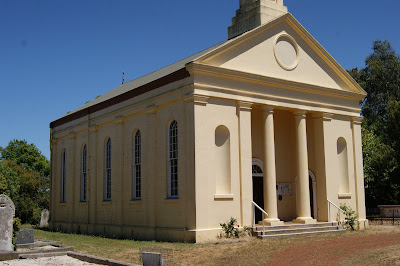 The pair of Tuscan columns flanking the front entrance were quarried at the property of colonial artist, John Glover, and carted to the church site by bullock wagon. On the triangular pediment above the front door is a large moulded roundel that may have been intended to house a clock face. 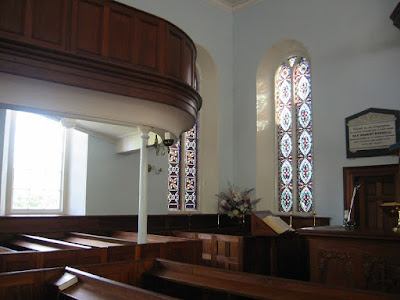 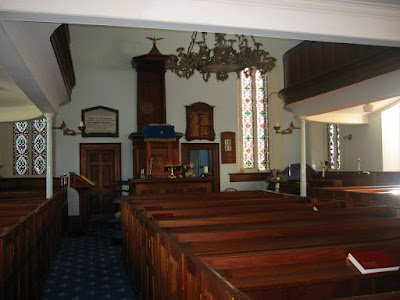 The interior is superbly appointed with box pews, gallery balustrade and a high “witness box” pulpit made of beautiful cedar brought from the Hawkesbury area. The walls are plastered, the ceiling timbered and the gallery supported by iron columns. A large chandelier seems almost to fill the space within the curve of the gallery. It is probably of 18th century date and is said to have been salvaged from a church in that had been damaged by fire. The pulpit is one of the few of its type remaining in . 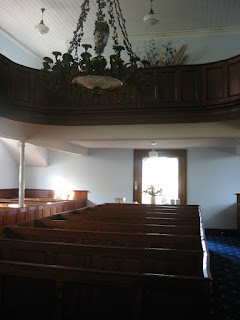 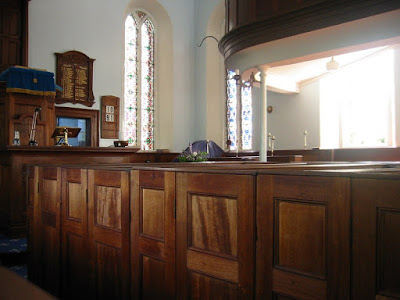 It has an octagonal canopy with a curved roof rising to a peak on which is perched a gilded dove and is entered through a door at the back. It dates from a time when a Presbyterian minister about to preach a sermon was ushered into the pulpit by an elder, and locked in until the congregation was ‘satisfied’, that is to say until there were no questions or criticisms on matter of doctrine that had not been answered. 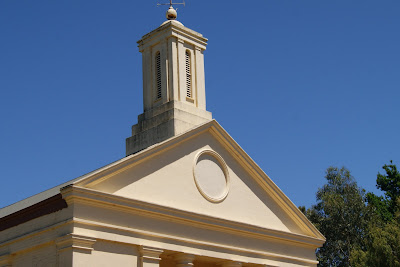 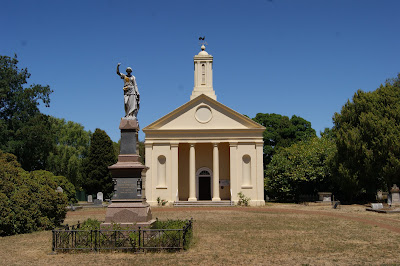 The first service was held in the new church on 5th September 1840 under the auspices of the Rev Russell. He would go one to minister at for almost 40 years. As the congregation grew, the original church was found to be too small to accommodate everyone and so a balcony with extra seating was added at a later date. 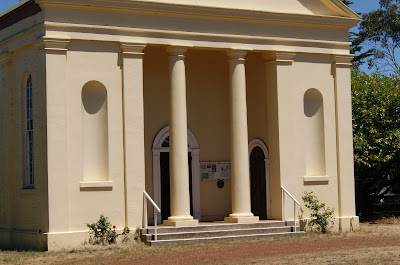 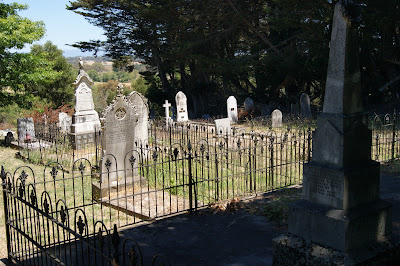 Many of the pioneering families of Evandale and the surrounding district were buried in the churchyard, including the church founder, Rev Robert Russell, whose grave is marked with a statue of “Hope” atop grey and red granite pillars and is in a prominent position in front of the church he brought to fruition through his vision and hard work. 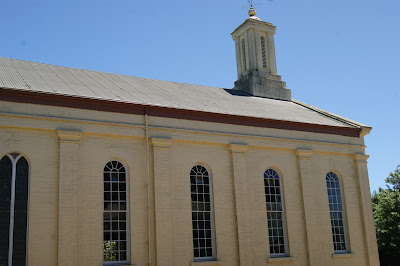 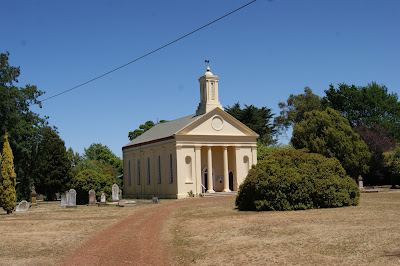 St Andrews is a fine example of Greek Revival architecture and is acclaimed as one of the best preserved places of worship in and is today, one of the most photographed buildings in Evandale.