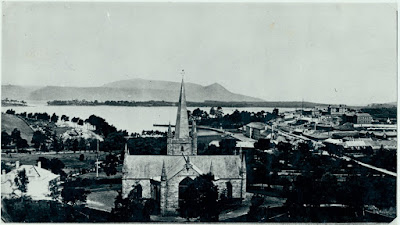 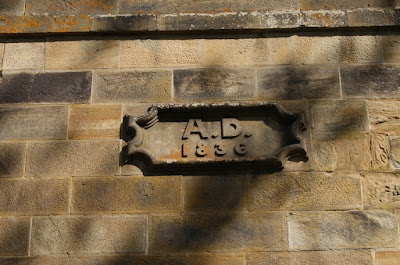 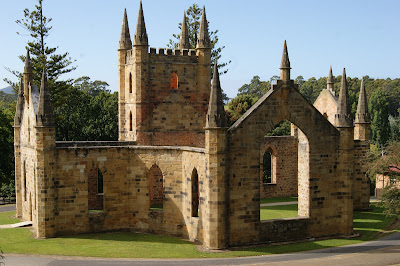 The foundation stone of the church was laid in 1836 by Lieutenant Governor George Arthur on his final visit to Port Arthur. The building was constructed by the convicts using stonework that had been prepared by the boys from the juvenile establishment across at Point Puer. The first service was conducted in 1837 and at that time, only one of the many windows had been glazed. The church was never officially consecrated, partly because it used by several different denominations and partly because of disagreements between the various church authorities. 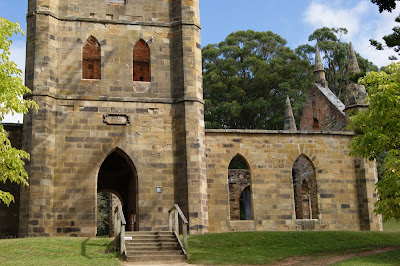 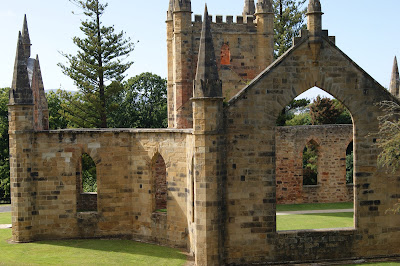 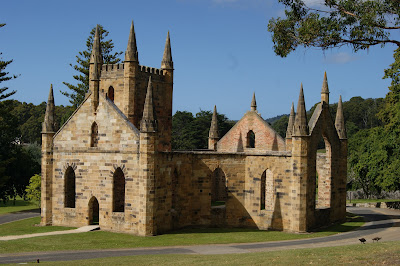 The church could accommodate 1000 worshippers. The convicts entered the building through doors at either end of the building and were seated on benches whilst 200 free settlers were accommodated on pews with paneled fronts that had been produced by the Point Puer boys. The free people entered the church via the main entrance and passed under a huge three tiered pulpit to an area that was screened from the convicts. 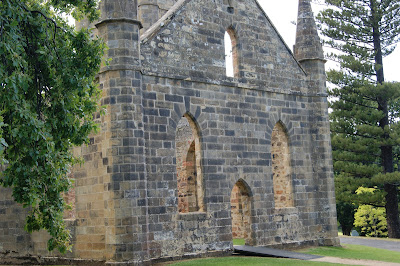 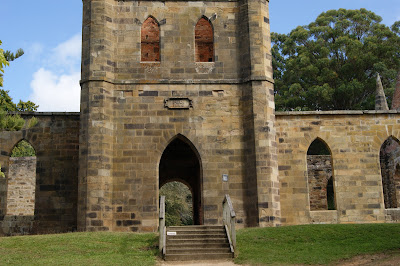 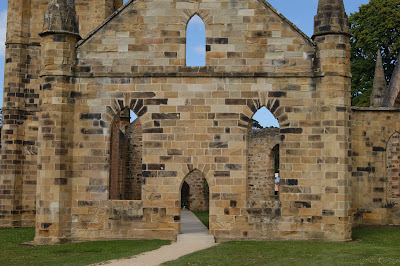 Religion was an integral part of the convict experience at Port Arthur as it was considered a very important part of the overall reform process. The church was originally presided over by Wesleyan Ministers until 1843 when the Church of England’s Reverend Durham was appointed to the settlement. This caused issues with Roman Catholic convicts who refused to attend services in the church and this resulted in the appointment of Father Bond to meet their spiritual needs. The Roman Catholics, at times, used the church for their own services and in later years a makeshift Roman Catholic chapel was in use on the 2nd floor of the penitentiary building. 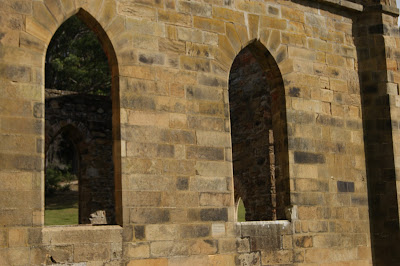 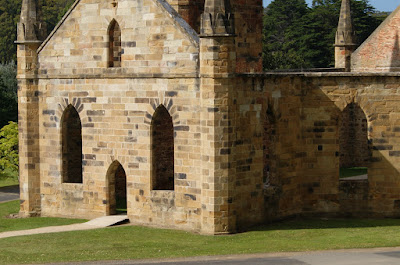 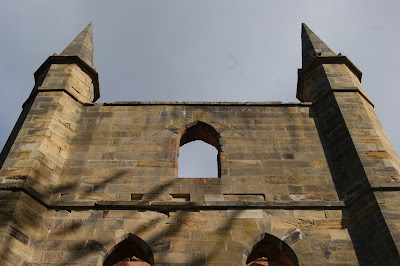 A 50 ft wooden spire, made of pine and painted to resemble stone with crushed sandstone sprinkled on it, stood above the belfry. The belfry contained a set of 8 bells that had been cast on site at Port Arthur in 1847. The highly skilled artisan who cast the chime of bells has never been identified. He was probably a convict working in the blacksmith’s shop and foundry. Bell casting is a complex process so it is more than likely that he would have worked as a bell founder prior to being transported. 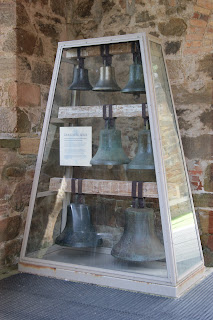 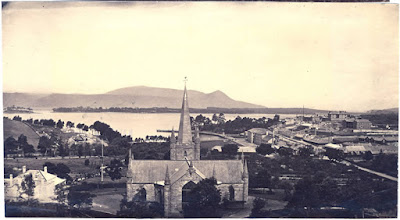 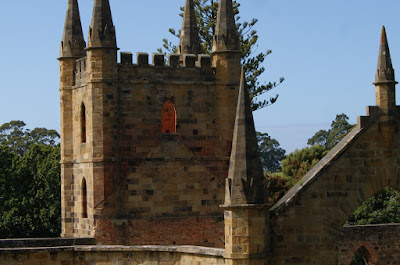 The Port Arthur chime was played like a musical instrument by a single convict. Unlike swinging bells, the Port Arthur chime was secured to 4 large timber beams in the church tower and each bell was struck by a metal clapper using ropes and pulleys operated by the convict. The bells were rung every morning as a “call to work” signal, rung twice a day for prayer meetings and possibly as a “down tools” signal each evening.  Unfortunately the wooden steeple was blown down during a storm in 1876. 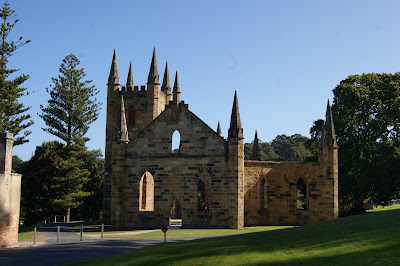 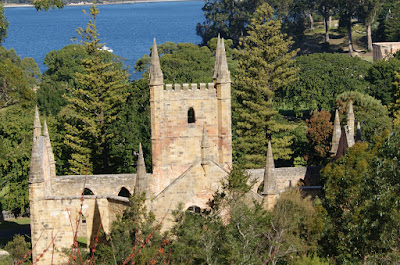 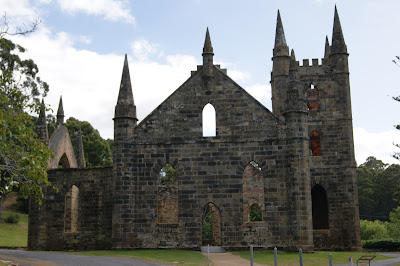 In 1884, sparks from a fire that had been lit to clean up around the Parsonage, which is situated next door to the church, caught the old shingles on the church roof. In spite of the best efforts by the locals, the church burnt to the ground. By the turn of the century, the church ruins had been overgrown with ivy and were viewed by visitors as a very romantic ruin. 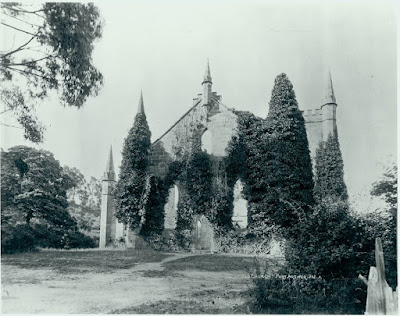 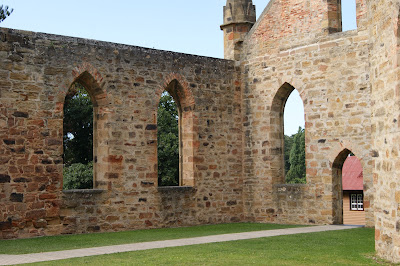 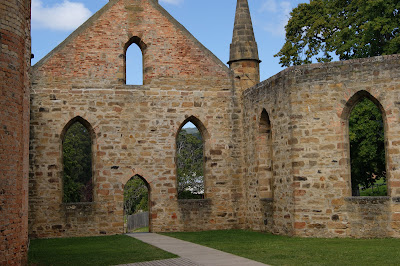 The church ruin survived well into the twentieth century and a restoration process was undertaken in the late 70’s/early 80’s by the State Government and the Parks & Wildlife Service and the work on the church was completed in 1985. It has become one of the iconic buildings at Port Arthur. Conservation and interpretation work has continued ever since. 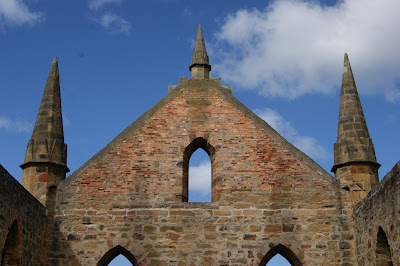 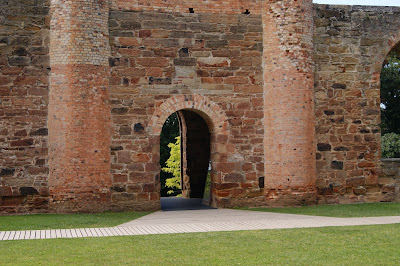 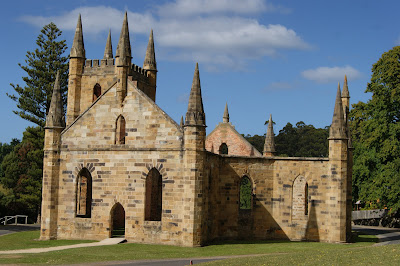 Main Text & Information Sources –
Interpretive signs at the site
“Port Arthur….As It Was” – Walter B. Pridmore