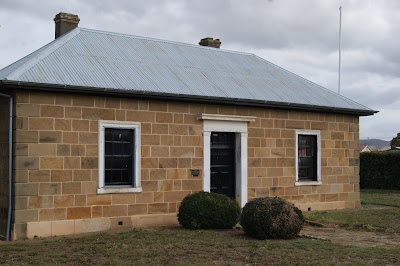 The Oatlands Supreme Court House is one of the oldest Supreme Court houses in Australia and one of the oldest sandstone buildings in Oatlands. The earliest part of the court house was built in the winter of 1829 on a shoestring budget. Police Magistrate Thomas Anstey had been lobbying for years to get a courthouse and police office constructed, but with no results until, by lucky chance, a convict stonemason from Campbell Town was sentenced to the Oatlands chain gang for misconduct. Campbell Town’s loss became Oatland’s gain. As soon as he arrived in Oatlands, stonemason John Mackintosh was nabbed for public works and set to work building the new “Chapel & Justice Room” on the scenic shoreline of Lake Frederick. With the assistance of George Wood, a transported highwayman whose greatest coup had been robbing the Brighton Mail Coach, the pair managed to erect a substantial stone building. 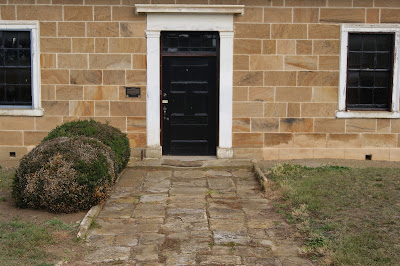 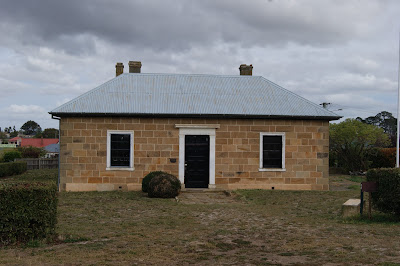 All this was accomplished while they were wearing the mandatory chain gang leg irons and the hated yellow slops marked with the broad arrow. Other members of the chain gang quarried the stone, carted the lime and provided the timbers. Thus, a convicted thief, a highway robber and a selection of transported criminals built one of Tasmania’s most important court houses. 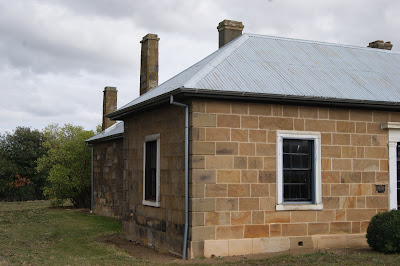 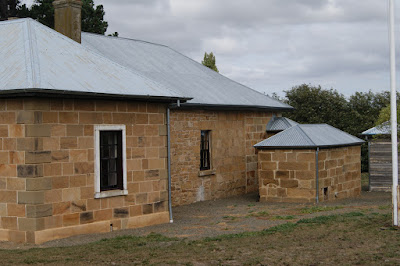 By 1834, the court house was completely inadequate to meet the needs of the district. To fix this problem, the Chief Police Magistrate sent a rough pencil sketch of proposed additions to Colonial architect John Lee Archer, the designer of Parliament House and St Johns Park. But Archer was not a man to do things by halves. Any other architect would have thrown together a few extra rooms and been satisfied with the results, but not Archer. Instead he set about giving the Court House a comprehensive makeover that would transform it from an ordinary regional court house into something quite extraordinary. 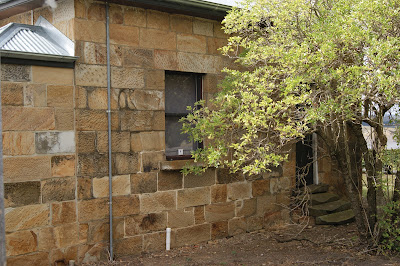 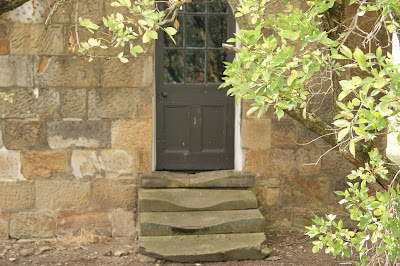 Archer’s first move was to build the new front rooms, not in simple freestone, but in beautifully executed ashlar stonework with decorative quoins. Not satisfied with this, he added a perfectly proportioned classical doorcase, decorative plaster cornices and mouldings and a raised circular platform for the judge’s bench. But by far the most exciting Archer inspiration was the decision to cut into the existing roof structure and insert a complex, precision built ceiling made from laminated timber beams. The final flourish in what was fast becoming a high status building was the addition of an expertly carved stone mantelpiece, quite possibly by the convict stonemason, Daniel Herbert, who at this time was engaged on his lasting masterpiece, the Ross Bridge. 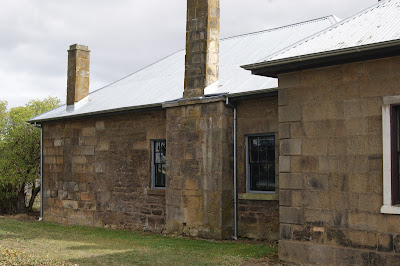 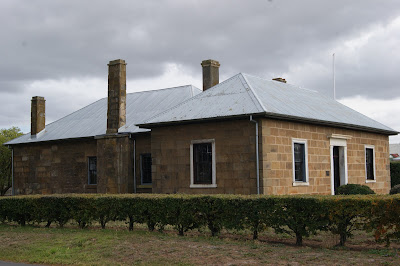 The charm of Archer’s grand vision may have been lost on some of the courthouse’s paying customers. After all, this was a place where your fate would be decided, especially if you were a convict. A great deal of the day to day business of the court house revolved around convict discipline. For example, in 1837, assigned servant Mary Burns was sentenced to “Six Weeks At The Washtubs at the Female Factory” for being “drunk, insolent and generally useless”. However, worse punishments were also common such as the sentence of 16 lashes given to Abraham Heywood for beating up another servant. In most cases, prisoners convicted of theft would be sentenced to hard labour in chains at Port Arthur. 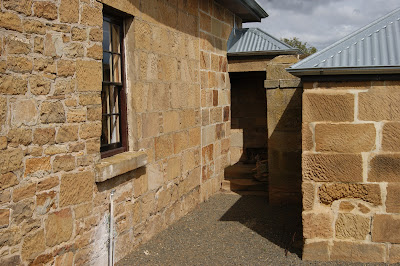 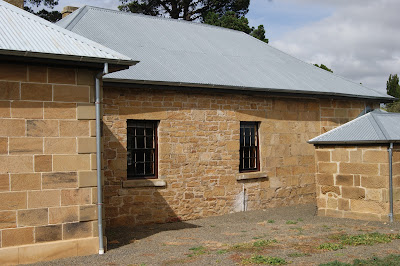 In 1841 the Oatlands Court was upgraded to a Supreme Court and the buildings were upgraded accordingly. A Judge’s room and jury room were added. Two holding cells were built at the rear. The commencement of the Supreme Court sittings consolidated Oatlands claim as the interior capital, as the only other sittings were at Hobart & Launceston. With the arrival of the Supreme Court, the Court House entered on a grander but grimmer phase in its history, as death sentences could now be imposed here. And for 18 unfortunate men, that sentence was carried out, often in front of a large crowd, outside the gates of the Oatlands gaol. 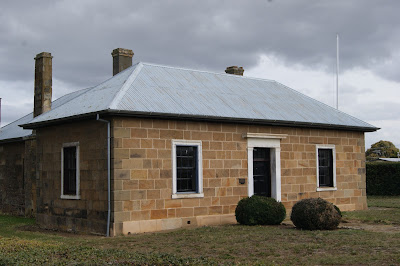 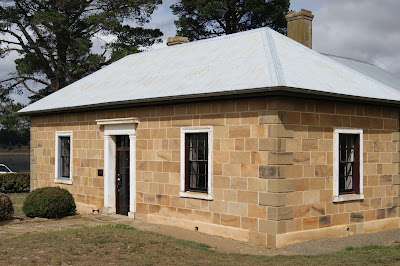 In 1848, plans were drawn up for a new and much grander Supreme Court House, to be attached to the gaol. The old courthouse was to be demolished. For reasons unknown, this plan was abandoned and the 1829 building was used for another 35 years. Even after its use as a court house came to an end the building continued to be used for public affairs. It was transferred to the Oatlands Municipality in 1862 and became the Town Hall and Council Chambers while court sittings continued. In 1885 the current Town Hall was built with a new court room and in 1891 the dilapidated Court House was sold to the Oatlands Mechanics Institute, which held lectures and ran a library. 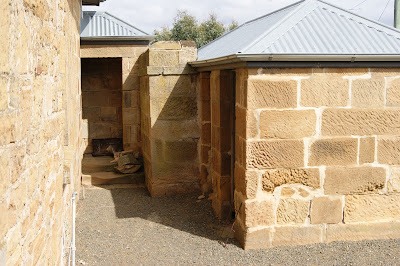 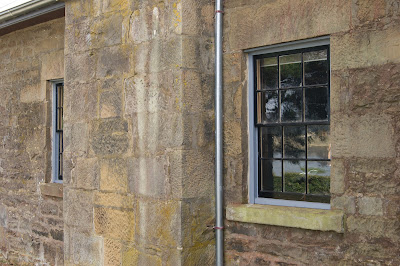 In a strange twist of fate, the Supreme Court, where so many life & death decisions had been made, became a family home in 1909. Now after decades of private ownership, the building is now owned by the Southern Midlands Council and is undergoing restoration as a heritage centre and exhibition space, celebrating the rich history of the region. A building of this age shows the passage of time, with every mark on the walls and floor telling a story about its history. 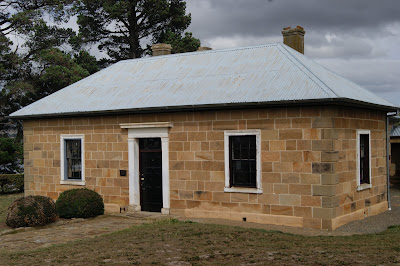