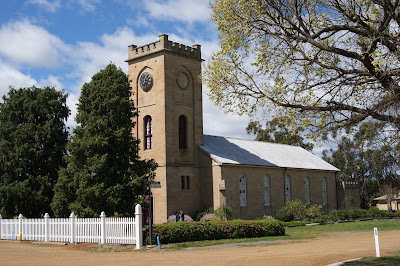 There are only a few older churches in Tasmania and most of those erected earlier have either been rebuilt or altered to such an extent that very little of the original building is left. For instance, old St. David's, Hobart, which was begun, as early as 1817, is now replaced by an entirely new cathedral. St. Matthew's, New Norfolk, opened for divine service in 1825, has been so altered that it would now hardly be recognized by its original builders. St. John's, Launceston, was completed in the same year, but that building was being rapidly swallowed up by the large structures that were rising around it. St. George's Church, Sorell, was commenced in 1826, but that church is now replaced by a new one. It is the same with the Longford Church, which was erected in 1829. 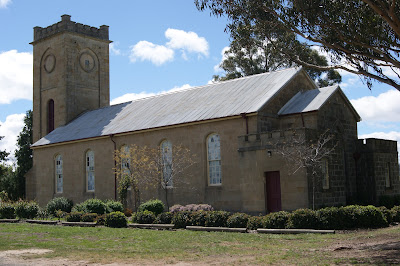 But St. Luke's Church, Richmond, stands practically the same today as when it was first erected. Of course, the present iron roof is modern. But the walls and tower remain the same. They are as they were when the builders removed the scaffolding from around them in 1836. The men and women of the early days would have no difficulty in recognizing the church to which they bent their steps from Sunday to Sunday. The same square, stern, massive building has watched the convicts march past in their clanking irons, has kept guard over the busy township in the days of its prosperous activity, and today stands sentinel over the quiet village that Richmond has now become. 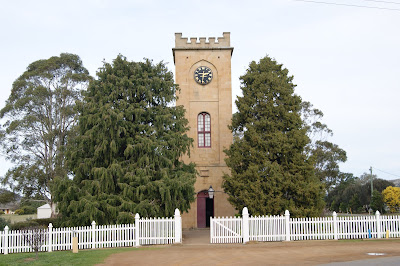 The present parish of Richmond was originally a part of the Sorell parish or Pittwater, as it was then called. The parish then consisted of Pittwater, Richmond, Jerusalem (Colebrook), and the East Coast as far north as Bicheno. The parish was constituted in 1825, and in that year the Rev. Wm. Garrard was appointed to take charge of it. This enormous district is now divided into four parishes. Mr. Garrard visited Richmond, and conducted service in the Court-house. 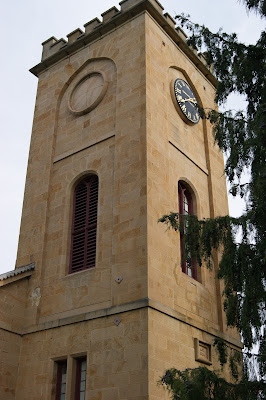 A start was made with the erection of a church at Richmond. The foundation stone of the Church of St. Luke was laid in 1834 by the Lt Governor George Arthur, Governor of the colony. Designed by John Lee Archer and built by convict labour, the church was completed in 1835. James Thompson, the convict who was responsible for the original timber work inside the building, was granted his freedom as a reward for his work. 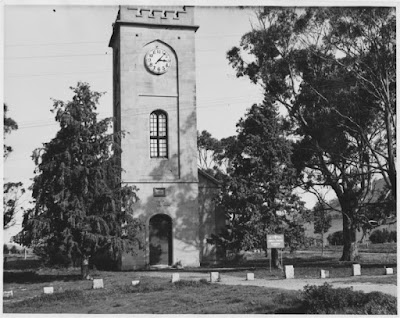 The church was erected on land given by Mr. Butcher. In consideration of this gift, there was granted to the Butcher family a right-of-way through one of the vestries to their pew at the top of the church. The stone for the church was quarried from the hill overlooking the township known at Butcher's Hill. The Government granted the use of a number of convicts in building it, but there is no record as to whether the Government also made a grant of money towards the cost of erection. The church seems to have taken some time in building, for it was not completed till 1835 after being constructed by the convict labour. Convict life was held very cheap in those days. The lash, or even death, was the punishment for offences not counted very serious today. And it is more than likely that the rising walls of the church saw the spilling of human blood. 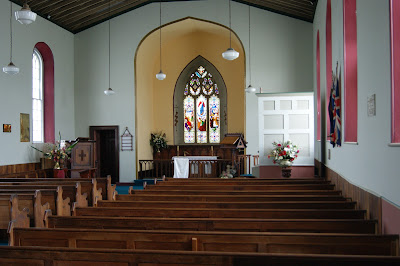 The curses of the convicts must have been built into those walls. The earliest associations of the church reek with crime and infamy. But there is one bright spot even in the building. There is a tradition that the convict responsible for the timbering of the roof received his liberty for the splendid way in which he did his work. As previously mentioned, this was completed by James Thompson who did receive his freedom as reward. The roof, as seen from the inside, excites the admiration of everyone that sees it. To us today it looks almost unnecessarily strong. 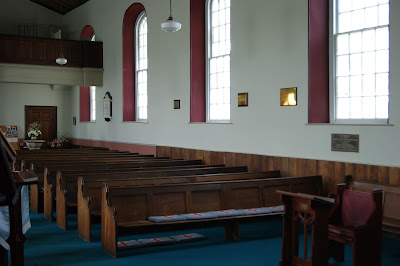 The first occasion on which the church was publicly used was the marriage of Mr. William Chambers with Miss Mary Heyward, on the 11th of March, 1836. The church was not properly finished even then. The flooring was not all in. Boards had to be laid upon the joists to allow the wedding party to reach the top-end of the church. But the parties to be married put up with these little inconveniences in order to make sure of being the first to be married in the new church. When they brought their first baby to be christened the chaplain presented them with his own Bible that he used in the pulpit. Mr. Chambers was the sexton of the church, and his descendants still live in the township. 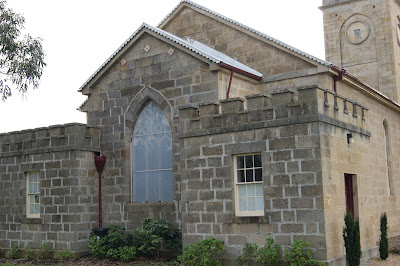 As soon as the church was opened there was quite a rush of marriages, as many as three taking place on the one day, and a total of twenty in the last nine months of 1836. The first chaplain of the newly-formed Richmond parish was the Rev. W. S. Aislabie. When Mr. Aislabie took charge of the newly-built church, its interior was somewhat different from what it is now. The pulpit was a three-decker, and was placed in the middle of the church, at the top end, before the Holy Table. The clerk sat in the lower part of the pulpit. Above him the minister read the prayers. For the sermon the preacher mounted higher still, and preached from the third storey. 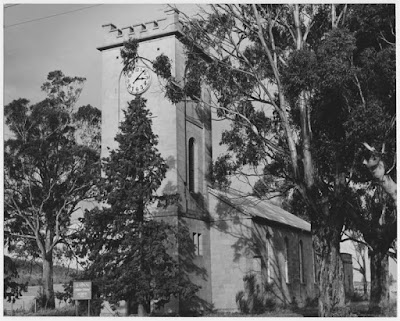 The pews were of the box kind, high sides, straight backs, narrow seats very uncomfortable to sit on. They were of cedar-as were all the fittings of the church. The present more comfortable seats were made out of the material of the old ones. The choir sat in the gallery, which had a curtain running along the front of it. The convicts who attended service sat in the body of the church on forms placed just before the gallery. The soldiers that formed their guard sat on corresponding forms, on the opposite side of the aisle. 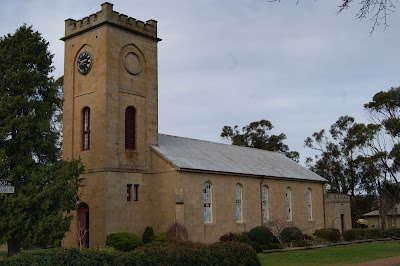 There was no organ, the singing being led by two musical instruments, the clarionet and the bass viol. A little later, an instrument known as a seraphine was bought and put into the church. This seraphine seems to have required a great deal of attention. For, in the church accounts, an item for 'tuning or repairing seraphine' is of frequent occurrence. 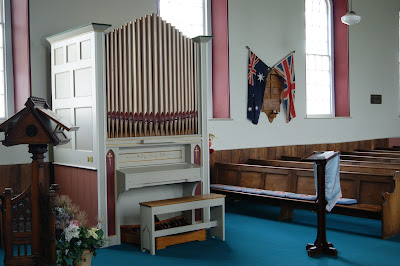 An organ was built in 1868 by Bevington & Sons, London, for Trinity School Room, Launceston The organ was later installed in St John's Anglican Church, Devonport in 1909, the gift of a parishioner where it was first used on Easter Day. It was rebuilt in 1966 by K.R. Davis & Son, at which time a new case, radiating-concave pedal board and swell box were provided. The organ was then installed at St Luke's in Richmond in 1984 by Australian Pipe Organs Pty Ltd when the Devonport church acquired a larger organ built by Fred Taylor for a church in Melbourne. More recently the casework of the organ has been painted and cornices placed on the upper side sections, with a marked improvement in its overall appearance. The builder's name in painted in gold on a board behind the keys. 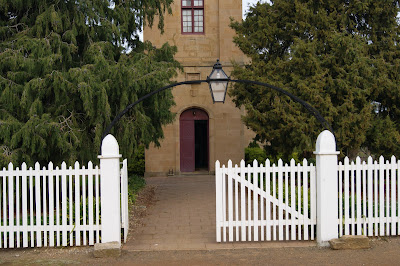 It was in the year 1864, that the beautiful stained glass window was put in at the end of the church over the Holy Table. The window has three lights, illustrating the glorious company of the Apostles, the goodly fellowship of the Prophets, and the noble army of Martyrs. The window is a major feature of St. Luke's Church, and is one of the finest of its kind in the diocese. 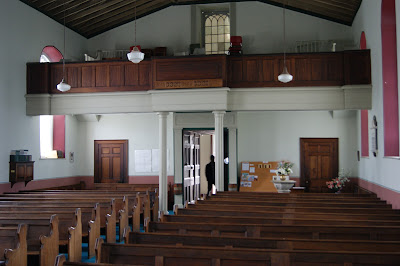 The 75th anniversary of the construction of the church also saw the establishment of a fund to provide for the restoration of the church as it was beginning to show its The fabric of the church was badly needing repair. Cracks in the walls were visible. Plaster was falling. The woodwork was decayed. Something had to be done as soon as possible. 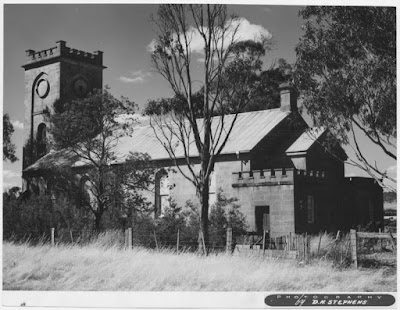 Obviously funds were raised and repairs and restorations were completed and have continued over time. The clock in the tower was one of six turret clocks manufactured by London clockmaker Thwaites and Reed in 1828 for consignment to the fledgling Colony for use on public buildings. Commonly referred to as the 'Richmond Town Clock', it was installed at St Luke's in 1922, having first been used in the original St David's Church at the corner of Murray and Macquarie Streets, Hobart. 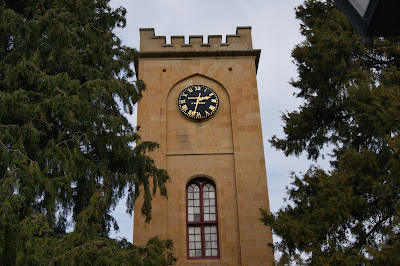 The clock was not installed in the new St David's Cathedral when it was constructed in 1874 and it gathered dust for some fifty years before being given to St Luke's in 1922 by the Dean and the Cathedral Chapter. In 2004 a clock restoration project was undertaken in conjunction with a major restoration of the Church building, including the strengthening of the roof, repairs to stonework and plasterwork, and painting. 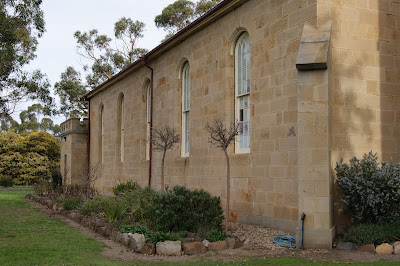 As a consequence of the restoration works, St Lukes continues to provide for the Richmond community and still is in wonderful condition. A major feature of the Richmond township and one you simply must visit if ever visiting Richmond. 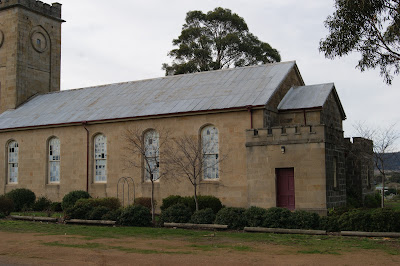