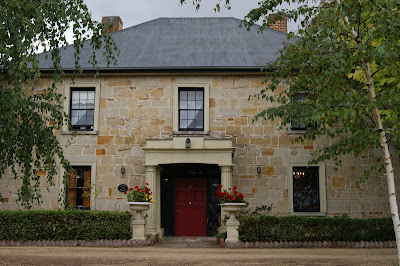 On 15 November 1831, James Burnip, a retired Sergeant, wrote in a letter to His Excellency Colonel George Arthur, Lieutenant Governor of Van Diemen’s Land:
“Since my discharge from thence [ The Royal  Veterans Corp, brought to the Colony as convict overseers] I established myself at Pontville at which place I have erected a large stone house which is licensed as an Inn and also a Blacksmith’s shop in which I carry on the business of a blacksmith. Both these buildings were erected solely at my expense on an allotment of Ten Acres of Land Your  Excellency was pleased to grant me…” 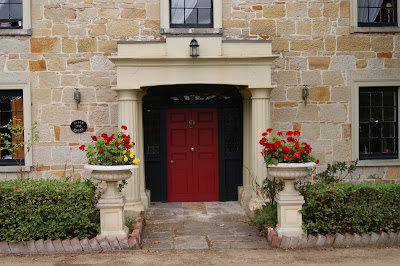 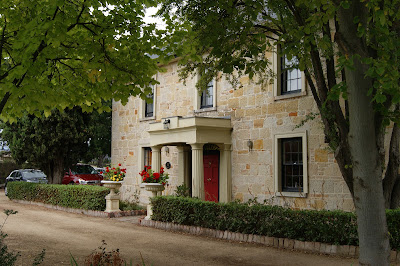 This is one of the first public records of the coaching inn described in 1860 as “one of the best roadside houses in the Colony”.  It was known first as The Blacksmith’s Arms, and successively as The Castle Inn and Brighton Hotel (1835), the Tasmanian Inn (1853), The  Epsom Hotel (1860)  and, now, Epsom House. Colonial records show Burnip being granted a liquor license in 1830, suggesting that the Inn was probably built in 1829. 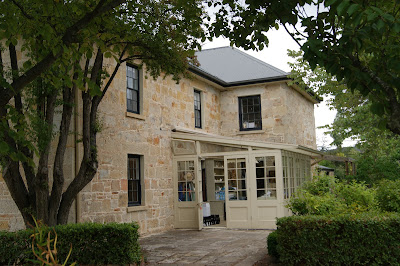 During the restoration of the house the cover of Burnip’s diary, a gift from his daughter Sarah, was found behind a cupboard where it had lain undisturbed for more than 150 years. It’s now preserved in the house Museum Cabinet. Also found in a wall cavity behind the same cupboard  were a “Shoes and Bones” charm, an old English folk custom designed to ward off witches, now preserved in situ in the Honeymoon Suite. 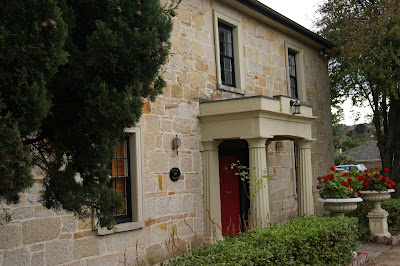 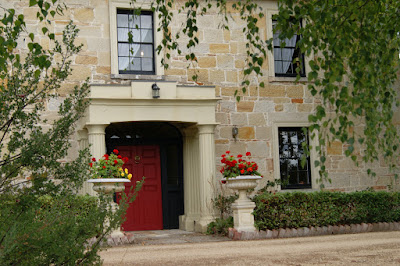 However Burnip proved an unsuccessful businessman and in 1839 lost the hotel to J&J  Solomon, Spirit Merchants, who supplied him with liquor. Judah Solomon installed his son-in-law, John Davis, as Licensee, which he remained for the next twenty years. Davis also ran The Regulator coach service to Hobart.
Epsom quickly became the social hub of Pontville because of its large ballroom on the first floor. It was the venue for the first marriage in Pontville. It served as the Methodist church, despite being a pub. It hosted the Southern Hounds and pre-hunt balls. 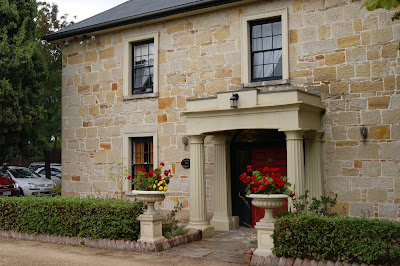 In 1855 the ballroom was completely re-furbished with its walls raised about half a metre and the present tented ceiling installed. Its grand opening was reported in the "Hobarton Mercury" of 23 May 1855, “On Wednesday evening a ball took place at Mr Davies’s, the Tasmanian Inn (now Epsom House), Pontville which was attended by all the elite of the neighborhood, and by several visitors from Hobart, including the officers of H.M.S. Fantome. 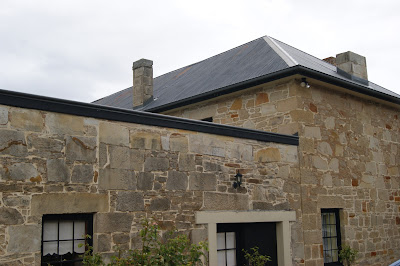 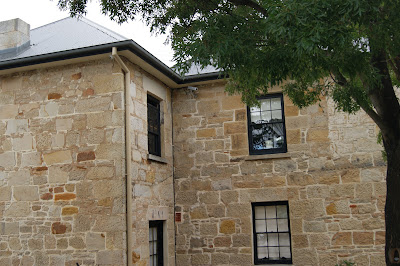 The new Assembly Room was opened for the first time on the occasion, and brilliantly lighted by handsome chandeliers and candelabra: the supper was excellent and very elegantly arranged, greatly to the credit of the experienced Host and hostess. Altogether the affair was such as has not been witnessed before in this colony." In 1875 a concert and dance was held in the Ballroom which was attended by 360 people – presumably not all in the ballroom at once. 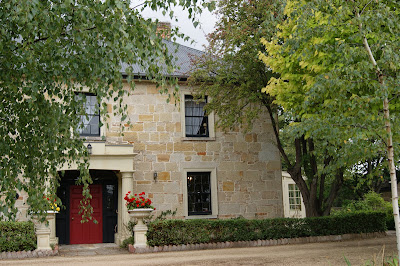 Epsom offered elaborate facilities for coaches. The coaching stable had 16 red cedar stalls and there was also an elegant stone and timber stable for racing horses. Epsom also supplied provisions to the village. Somewhere between 1839 and 1843 Davis extended the original façade of the building to the south by the addition of a shop. In 1843 one William Cook was tried for his life in the Supreme Court of Van Diemen’s Land before Justice Montagu for the theft from Davis’ shop of 71 silk handkerchiefs, valued at 17 pounds. He escaped with his life because the judge found that Davis had put temptation in his way by failing to properly supervise his shop. Cook’s sentence was commuted to seven years in the penal colony at Port Arthur. 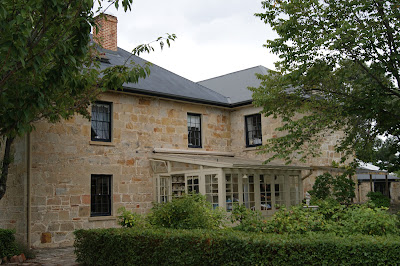 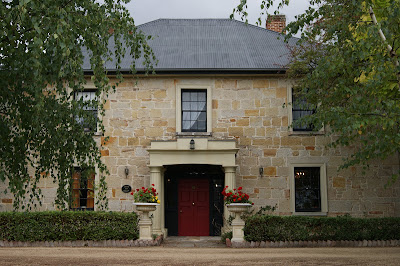 When Davis tried to recover his costs the judge refused, noting that Cook’s theft had been the third or fourth larceny from the premises in recent months. Davis’ argument that “there was hardly a constable in the settlement for the protection of its inhabitants” received short shrift from his Honor: “You leave your store without even a bell or a dog to protect during the time that you are dining in another room… Contiguous as is your store to a public-house about which men are continually prowling, it is natural that a knowledge of the little vigilance which you bestow on the protection of your property, should act as an incentive to the perpetration of crime”. 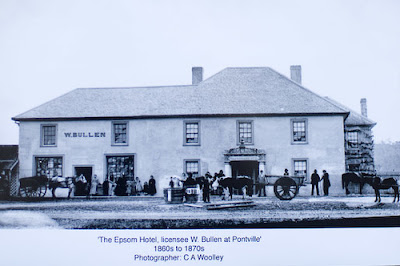 The Solomon family owned the property and ran it as a pub through successive licencees until 1896, when it was de-licensed and bought by the Johnsons.  The photo above clearly shows the store in the early 1870’s, when W Bullen was the licensee.  The poster inscribed “WAR”, affixed to the water barrel in the foreground, probably refers to the Franco-Prussian war. The property was operated in the 20th century as the Epsom Store, run by the Johnson family. Many locals still remember buying lollies in the 1960’s from Miss McGrath, housekeeper and companion to Harry Johnson. Sadly, the store was demolished in the 1970’s though its convict-hewn stone, abandoned on the site, was recovered and used in the restoration. 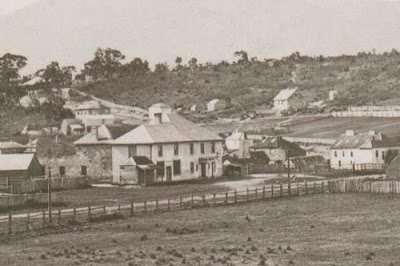 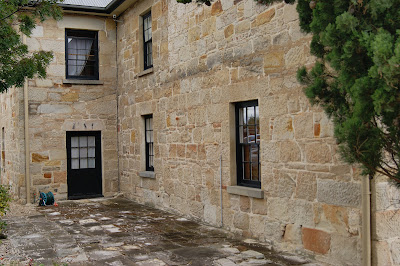 Epsom has now returned to its origins as a venue for public entertainment. In 2006 the restored ballroom hosted the Australian String Quartet for what appears to have been the first public performance in 100 years.  It again holds a liquor licence with Geoffrey Robertson joining a long line of former licencees. Current owners, Geoffrey & Jacqui Robertson, stated on the Epsom House website “Epsom’s history continues to be fleshed out as people with a family and social connection to the house contact us with their stories.  To them we owe knowledge of the “Bushranger’s Hide” in one of the bedrooms, the site of the Freeman and Convict Tap rooms and the location of the cellar. We hope that the restoration work we have done on the house and the history which animates it will ensure it continues a vibrant piece of Tasmanian and Australian heritage.”

It is certainly a beautiful building and a credit to the efforts of the Robinson’s to bring the place back to its former glory.