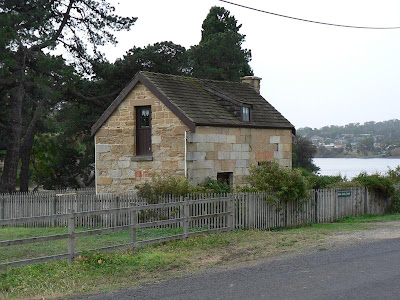 A small and simple cottage, built by James Austin in 1809 is located a couple of hundred metres from the Austins Ferry Yacht Club.
Austin was a convict who had been transported to Port Phillip in HMS Calcutta in 1803 and then transported to Van Diemen's Land in 1804. His crime was the theft of beehives valued at thirty shillings and he built Austins's cottage on his release from local stone. He named the cottage and farm after Baltonsborough the village of his birth in Somerset, England. In 1816 James Austin and his cousin James Earl established the first trans Derwent ferry service which remained the main transport route from Hobart Town to Launceston until completion of the Bridgewater causeway in 1838. 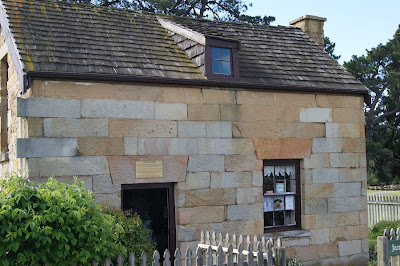 James Austin in partnership with his cousin John Earle established the original ferry service from Austin's Ferry to Old Beach - a crossing of less than 3/4 mile. Both men arrived in the Colony of Van Diemens Land in 1804 having been transported from England for stealing beehives. They were released in early 1809. James was granted land on the West of the Derwent where his cottage still stands today. It was from here that the cousins offered fellow colonists transport across the river. Initially, travellers were rowed across on demand after being offered refreshments at Austin's farm. Eventually, the service became more regulated with two crossings a day. Earle built a hut on the Old Beach side of the river in 1811. 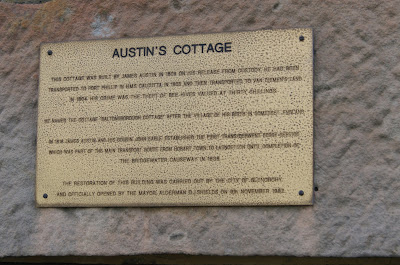 In 1815 Austin and Earle built their first ferryboat and cattle punt but it is 1816 that is recognised as the year this, the first trans Derwent ferry service, began. It was not until 1818, however, that the ferry between Austin's and Old Beach was officially licensed and became part of the Hobart / Launceston road. An inn had now been built to accommodate travellers overnight, not far from Austin's Cottage - it was later to become known as Roseneath Inn. In 1820 Austin and Earle announced the completion of their new launch - a flat bottomed, flat decked punt - that was capable of transporting 30 head of cattle, 200 sheep, or 2 carts and 16 oxen. This "floating bridge" was towed across the river by one of the smaller boats. By 1821 Earle had built an inn at the Old Beach side of the ferry - now known as Compton Ferry. The demands for the service continued to grow and an even larger ferry was commissioned by Austin. This vessel could carry 5 loaded carts and their teams of ox, 100 head of cattle 300 sheep or "a proportional quantity of other produce." 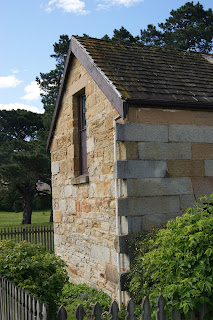 In 1826 John Earle retired due to ill health and the ferry service continued to prosper under a new partnership - that between Austin and C. Goodridge. Austin had built two horse boats and two small boats.
During this same year the Land Commissioners in their report on the survey of the road from Hobart to Launceston complained of the delays involved in crossing the river. They were of the opinion that the ferry owners did very well out of their business and could therefore afford to offer a far better service at a lesser expense to the user. They recommended a bridge be built from Black Snake - this bridge, however, did not eventuate and the ferry service continued to be a very profitable business for at least the next ten years. 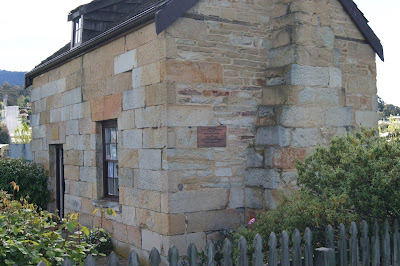 Goodridge took over the lease from Austin of both the Roseneath Ferry and the Compton Ferry in 1828. He had at his disposal three large punts capable of transporting 600 sheep or 200 head of cattle or 10 loaded carts with their teams at any one time. He also had 3 horse boats and 2 passenger boats.
In mid 1829, home sick for England, Goodridge left the colony and the lease of the ferries was taken over by Solomon and Josiah Austin - James Austin's nephews. With the death of their uncle in 1831 ownership of the ferries became theirs. The Bridgewater Causeway was opened in 1836. The ferry service soon proved to be a far less lucrative business. 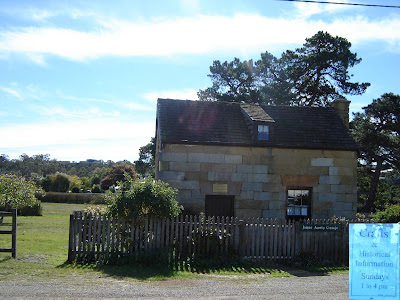 Little is known about the ferry during these years. The Roseneath Ferry with boats was advertised for lease in 1848. This was the year the bridge linked both sides of the Bridgewater Causeway and it is thought that there would have been little demand for the large punts. The Compton Ferry had been purchased by Alex Ainslie in 1840 and, as a result of a disagreement with him, the Austins had destroyed both jetties on their side of the river.

James Austin's original cottage has been preserved and restored as a tourist attraction by the City Of Glenorchy where it provides crafts and historical information.