The original bridge at Ross had been crudely constructed in 1822 of uncemented stone piers with a road surface of logs and clay. Although it soon began to show marked signs of wear it was not until 1829 that the governor instructed that it be repaired by the Royal Staff Corps. Previously, in 1828, Nicholas Turton, the Inspector of Roads, visited the bridge after the two central piers had collapsed. Although the governor decreed that the bridge be repaired in 1829, it was not until 1836 that the present Ross bridge was opened to pedestrian and wheeled traffic. The intervening seven years were marred by corruption, inefficiency, and mismanagement. 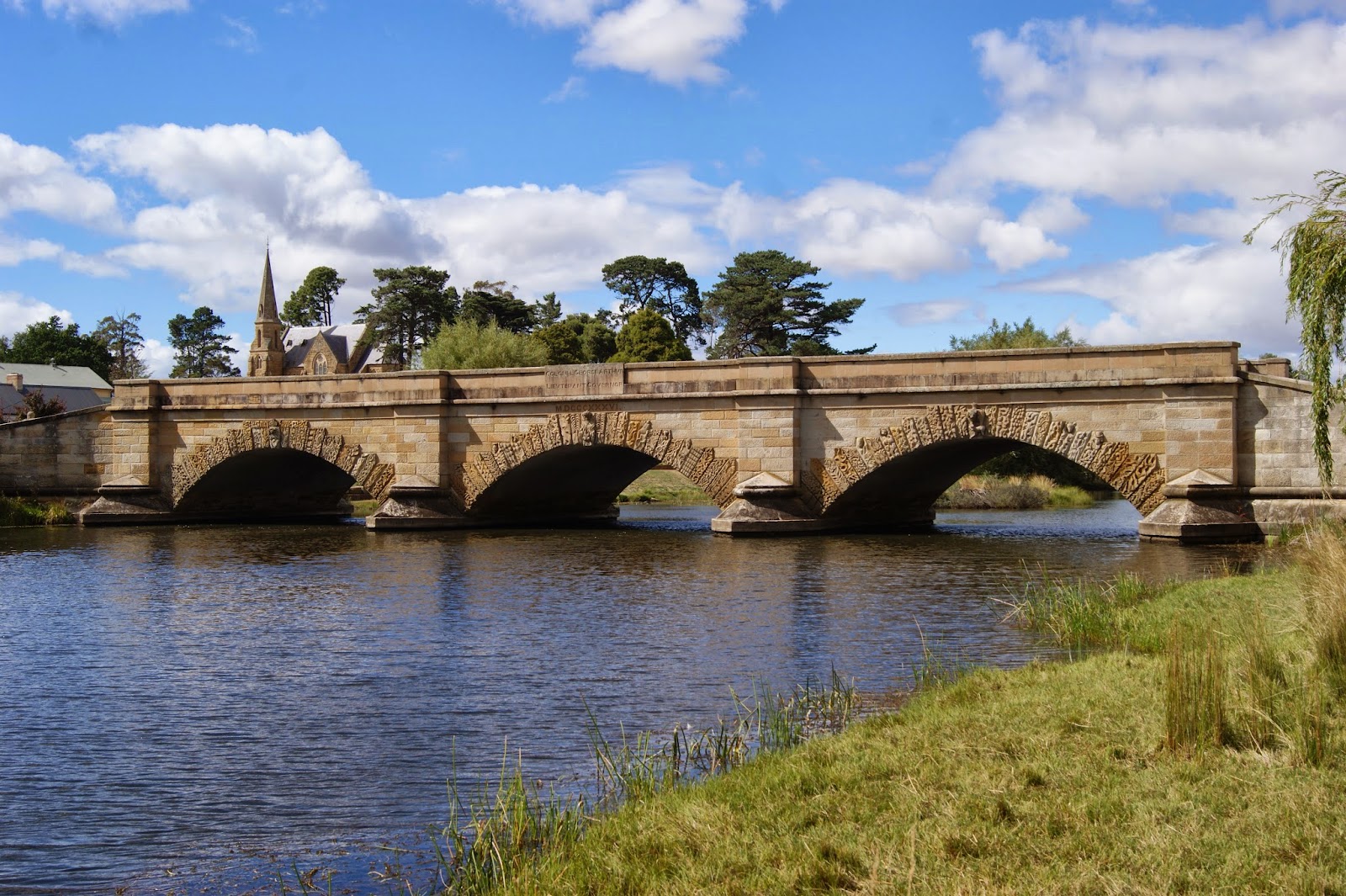 The Royal Staff Corps arrived in Ross at the beginning of winter to repair a bridge subject to flooding in the winter months. Their commandant, Lieutenant Vache was interested in neither the bridge nor his convict ' labour. When he was recalled the following August it was as if he had never come. The rebuilding had progressed only as far as the stockpiling of cut logs and the building of an unspecified number of unconnected piers. In August 1829 Vache was recalled and the six prisoners who had come with him were placed under the supervision of Alexander Jackson, the Commissariat Clerk at Ross. Still no progress was made and although Roderick O'Connor, Inspector of Roads, was appalled at the lack of work done when he visited Ross in 1830, he could do nothing to relieve the situation as he could spare no mechanics from other construction and road work. 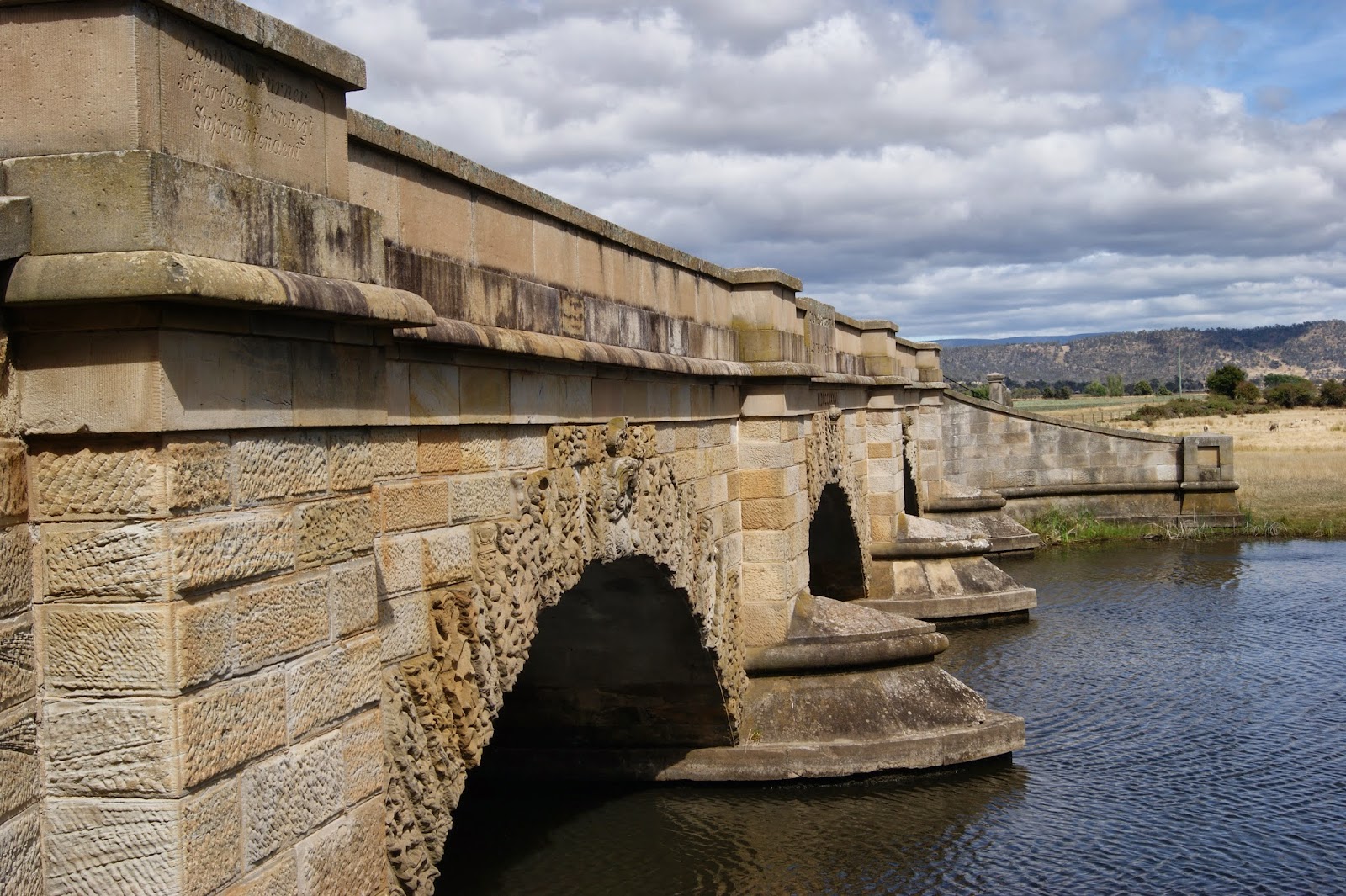 With the final collapse of the old bridge in March 1831, the situation became more urgent. A contractor who had been repairing the barracks at Bothwell, a Mr. Foord, was called in to superintend the bridge work. At the time of Foord’s arrival the bridge was to be rebuilt with timber. Soon afterwards however, O’Connor decided that a brick bridge would be more durable. Foord, taking advantage of the situation, erected brick kilns. Stone was also being cut from local quarries for the construction of the bridge piers. Curiously the piles of brick and stone did not seem to be increasing yet an increasing number of brick & stone buildings sprang up in the village. The official superintendant, George E Cock, the successor to Jackson as commissariat clerk, turned a blind eye to the obvious black market traffic in government supplies. However, it all soon caught up with Foord and in September 1832, he was sacked from his position. While all this was going on, work was further being impeded by a dispute over the choice of the site for the new bridge. It was not until June 1832 that this was settled. John Lee Archer, the Government's Civil Engineer, was forced to agree that although Roderick O'Connor's site was further from the quarries it was more suitable for the type of structure they were planning. The new bridge was finally constructed approximately 100 yards downstream from the site of the old bridge. 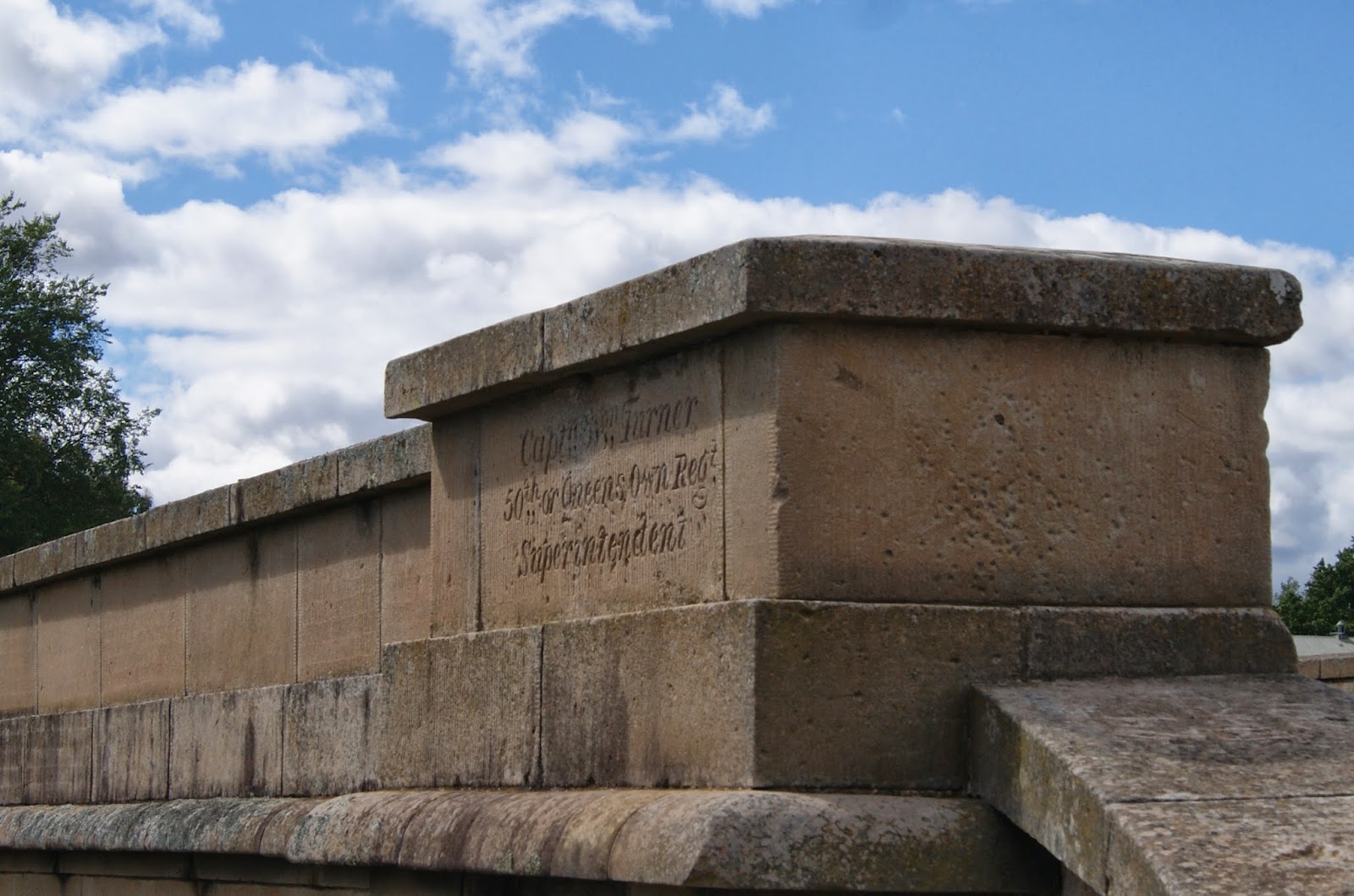 In March 1833 it seemed that progress was finally being made. O’Connor recommended a convict, James Colbeck as superintendant of construction. Archer had, however, already hired a free settler, Shadrech Purton, as overseer. Cock remained acting superintendent. In April 1833 Archer visited the site with a revision of his original design. There were now to be three arches instead of five. 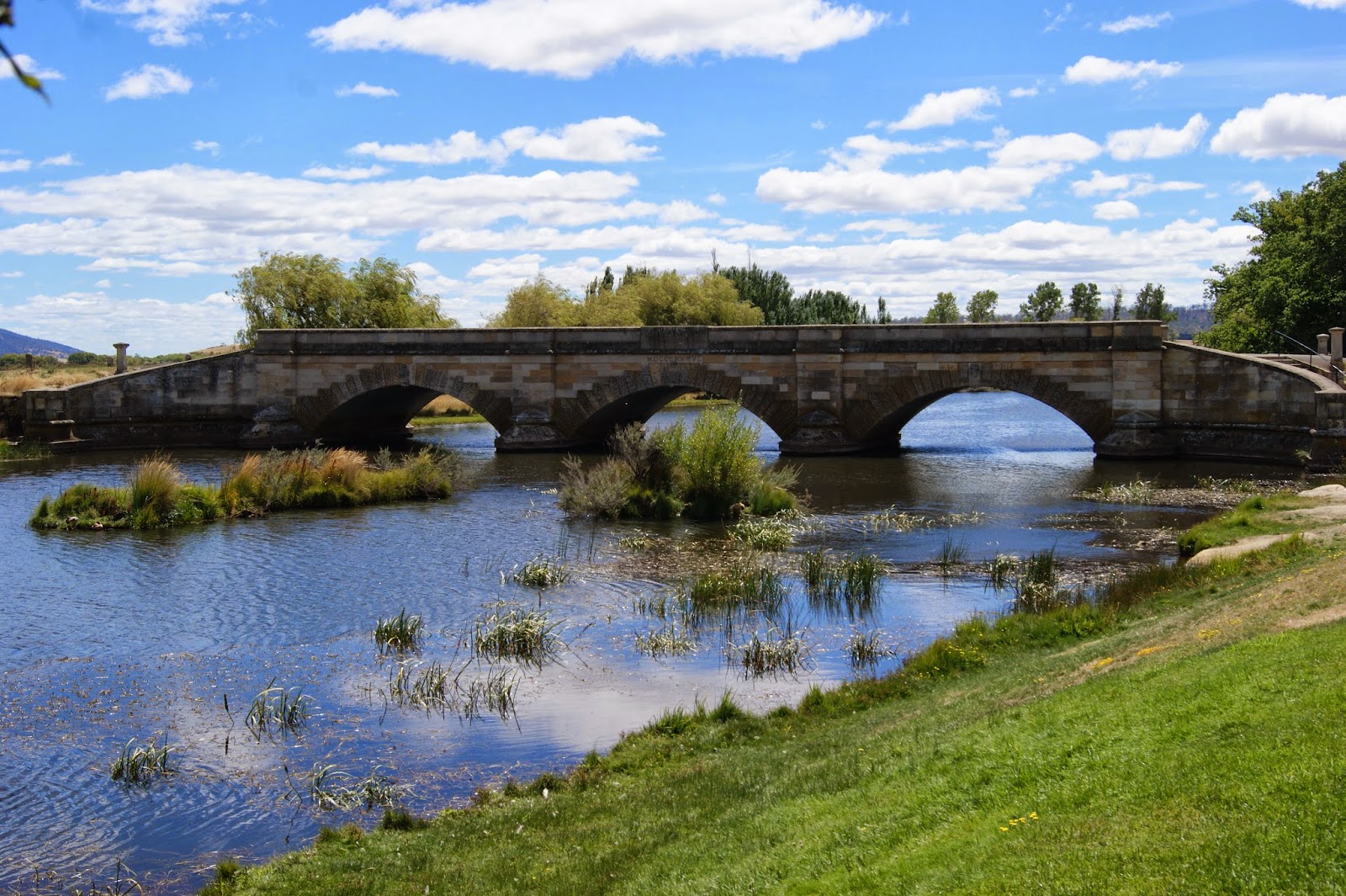 In November of that same year, 1833, a superintendent was finally appointed who had some qualifications for the job. This was Charles Atkinson, a young English architect recently arrived in the colony. He was appointed by Governor Arthur himself. Events of 1834-5 proved, however, that without a master mason the architect was nothing. In December 1834, Colbeck, who had been in Ross since 1831, was sent, along with others, to Hobart Town for discipline. By March 1835, however, the work on the bridge in the absence of Colbeck had virtually ceased. In May 1835, Archer requested that Colbeck and another convict, Daniel Herbert, who was overseer of the building of the new Customs House in Hobart, be sent to Ross. In the same month, Archer and Josiah Spode, Principal Superintendant of Convicts requested emancipation for both Colbeck & Herbert on completion of the bridge. This was later granted by the Governor. 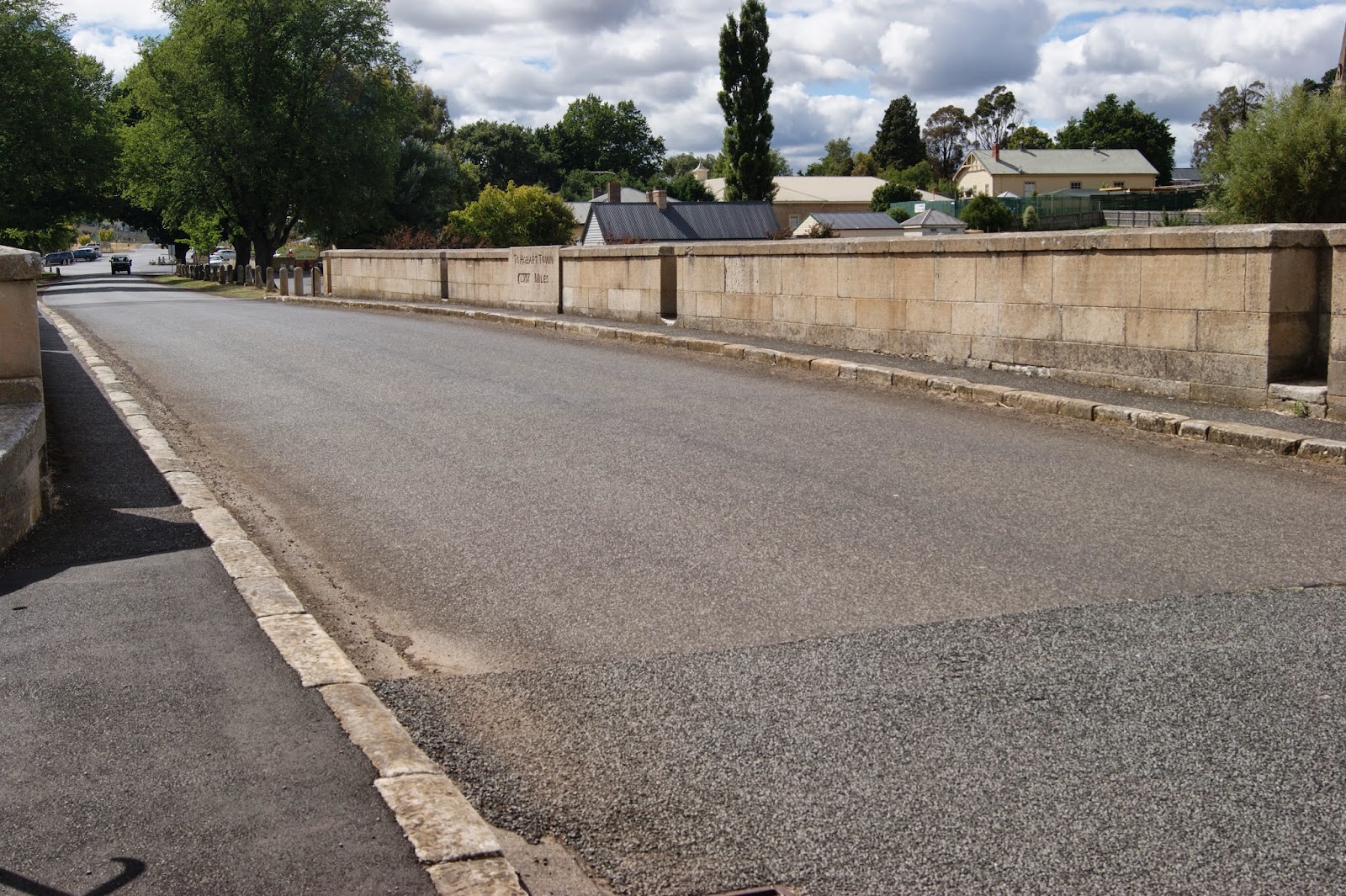 From this time onwards work continued systematically and consistently. The architect, Charles Atkinson, was dismissed in 1835 though he stayed in Ross to continue work on St. John's Church of England. He was replaced by William Turner in June, at the same time that Herbert and Colbeck arrived. Atkinson’s dismissal seemed to have no effect at all on the progress of construction. As the new superintendant, Turner made no secret of the fact that he had no knowledge of construction and placed the supervision of the project entirely in the hands of Colbeck & Herbert. 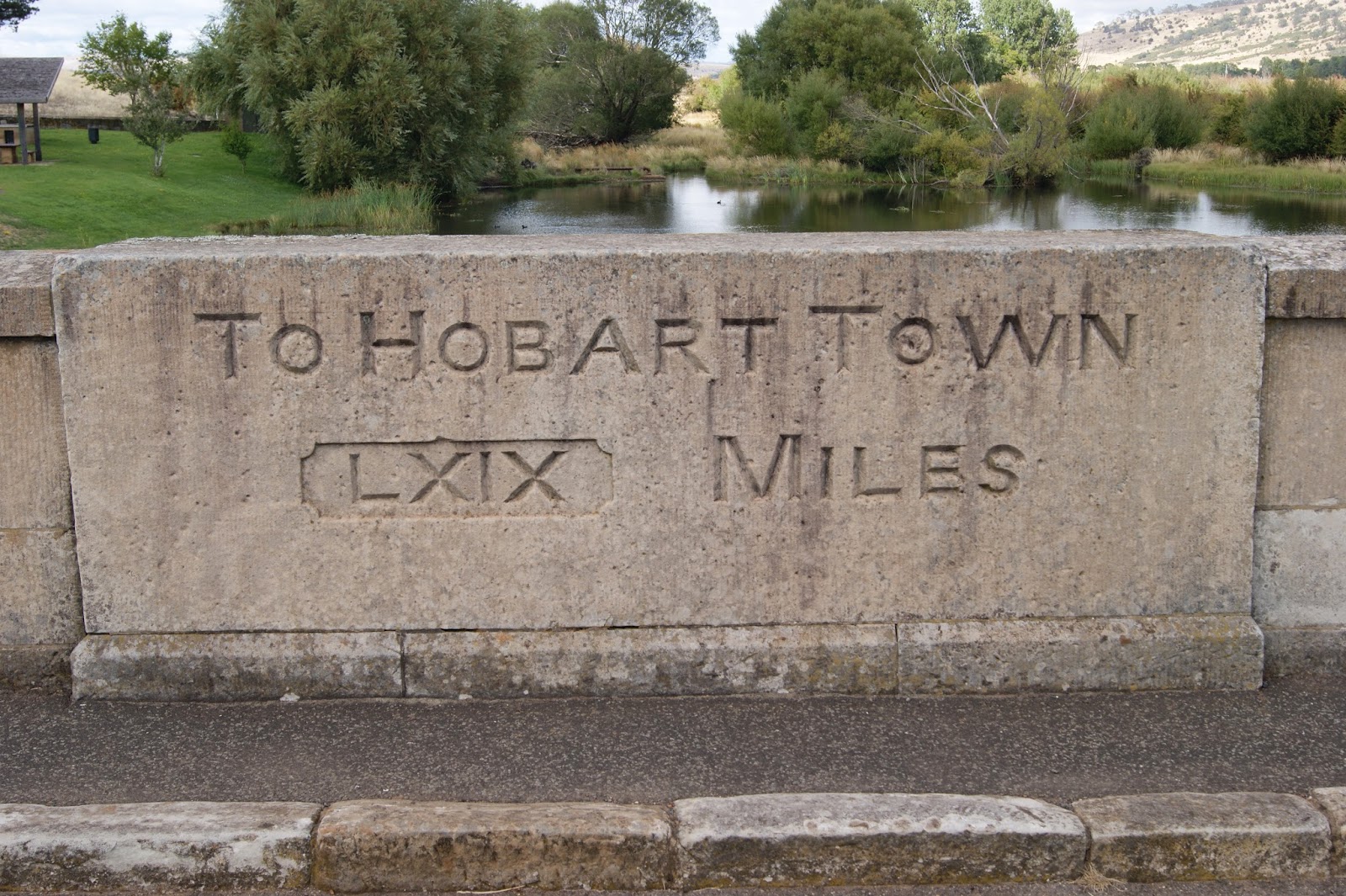 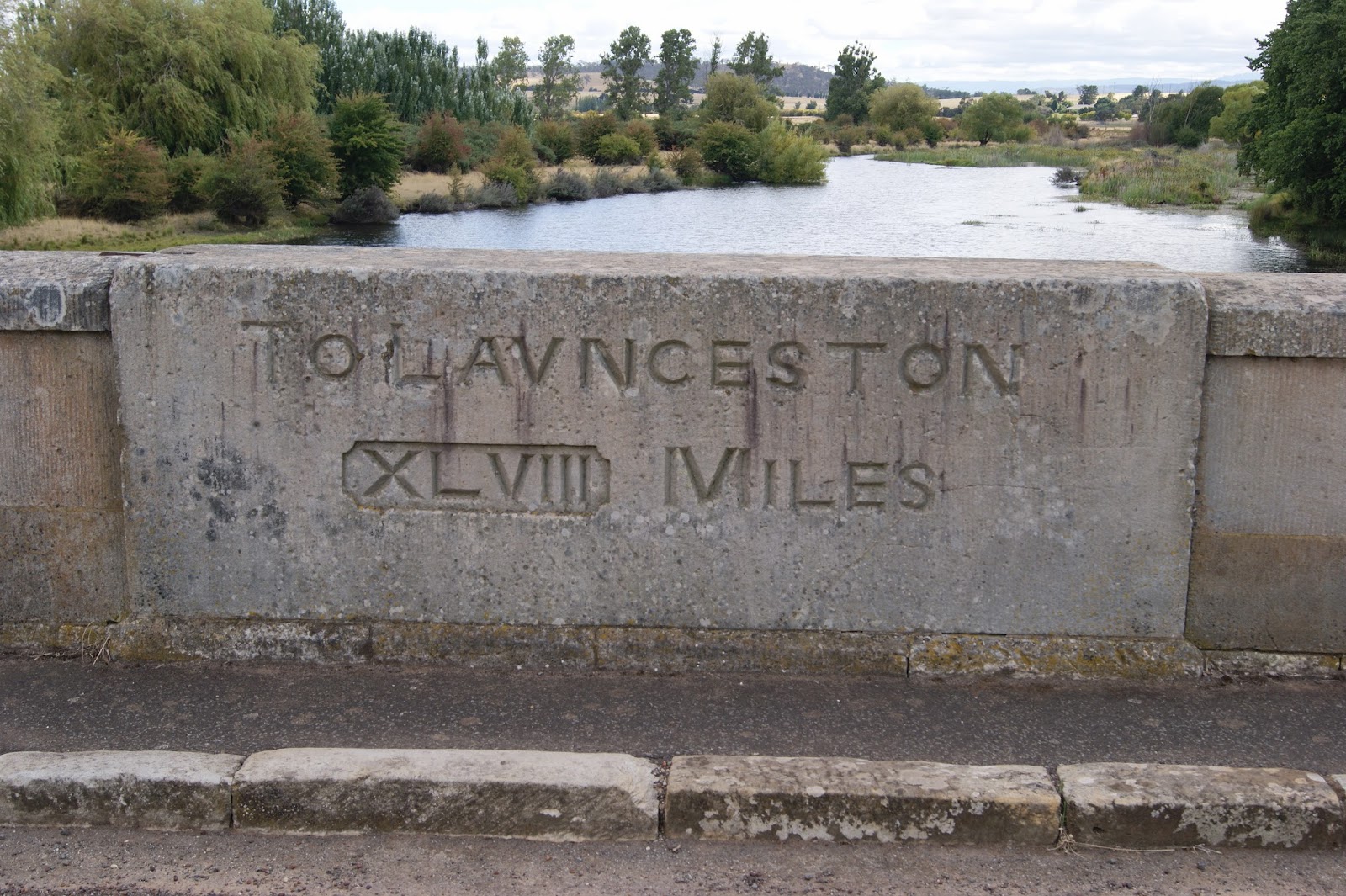 One year later, on 14 July 1836, the bridge was completed and was declared open by Governor Arthur on 21 October 1836. At the same time the remains of the old bridge disappeared for ever; it was blown up. It had taken Herbert and Colbeck only thirteen months to do the bulk of the construction work on a project that had been started seven• years previously. Even more amazingly it had taken only fifty-eight weeks - from 29 May 1835 to 14 July 1836 - to carve the 186 arch stones. 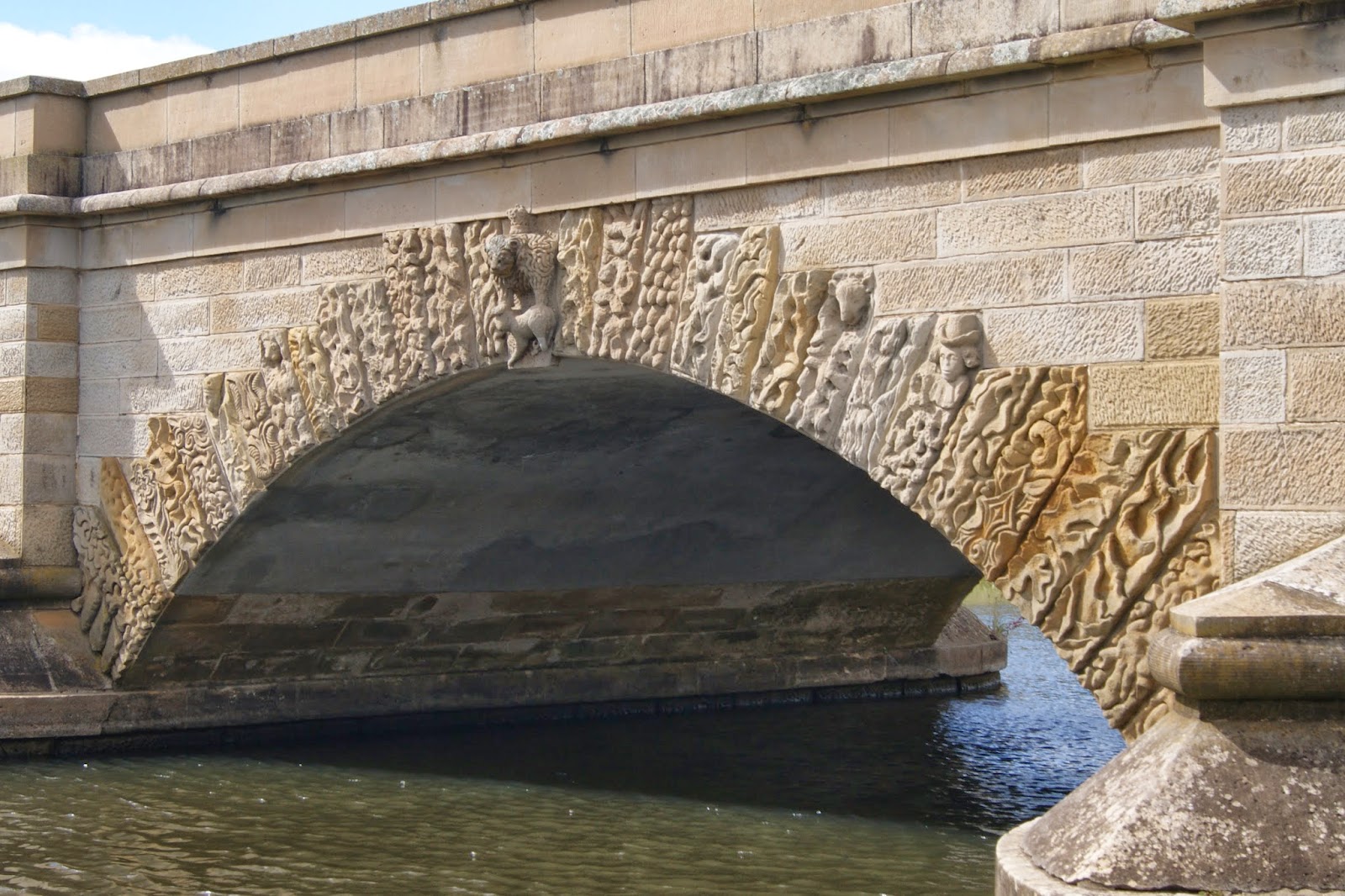 The feature which sets this bridge apart from its contemporaries is the series of carvings on the arches. There are 186 carvings in all, 31 over the top of each arch. Many are not directly representational but give impressions of rural activity with stylised wool bales and wheat sheaves. On the keystones, and elsewhere on the bridge face, are depictions of human and animal figures. The people include Daniel Herbert's wife, Mary; a self-portrait of Herbert himself; Jorgen Jorgensen, a Danish adventurer and his wife Norah Cobbett; Lt.Governor George Arthur caricatured in his top hat; the sixteenth century protestant, John Calvin; John Headlam, the hated schoolmaster, identified by his mortar board; William Kermode, a grazier prominent in local affairs; and a Tasmanian aborigine. 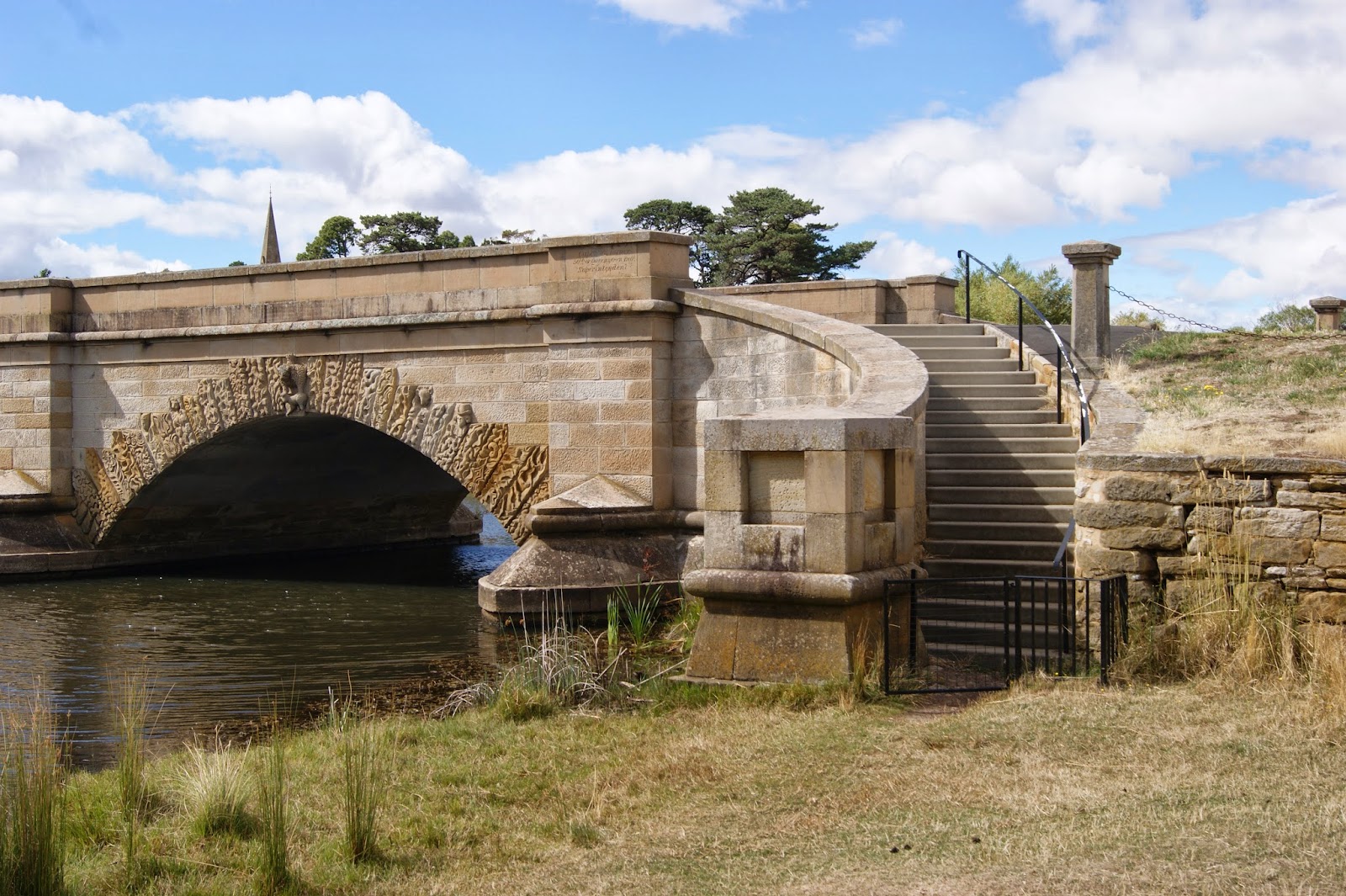 The bridge has become the most famous of the bridges on and around the Midland Highway  and carries the road into Ross across the Macquarie River. It is generally accepted as the most beautiful masonry bridge in Australia and matches its beauty with a sense of strength and permanence.