The roots of can be traced back to ’s first Catholic bishop, John Bede Polding OSB (1794–1877) who visited Van Diemen’s Land in 1835 en route to taking up his posting in . Of the three designs considered, that chosen was by architect Henry Edmund Goodridge (c.1800–63).
The design used at would appear to be one of a small portfolio that Polding obtained from Goodridge prior to sailing for on 26 March 1835. All of these designs were for small rectangular Gothic boxes with Early English detail and pinnacled buttresses at the corners. 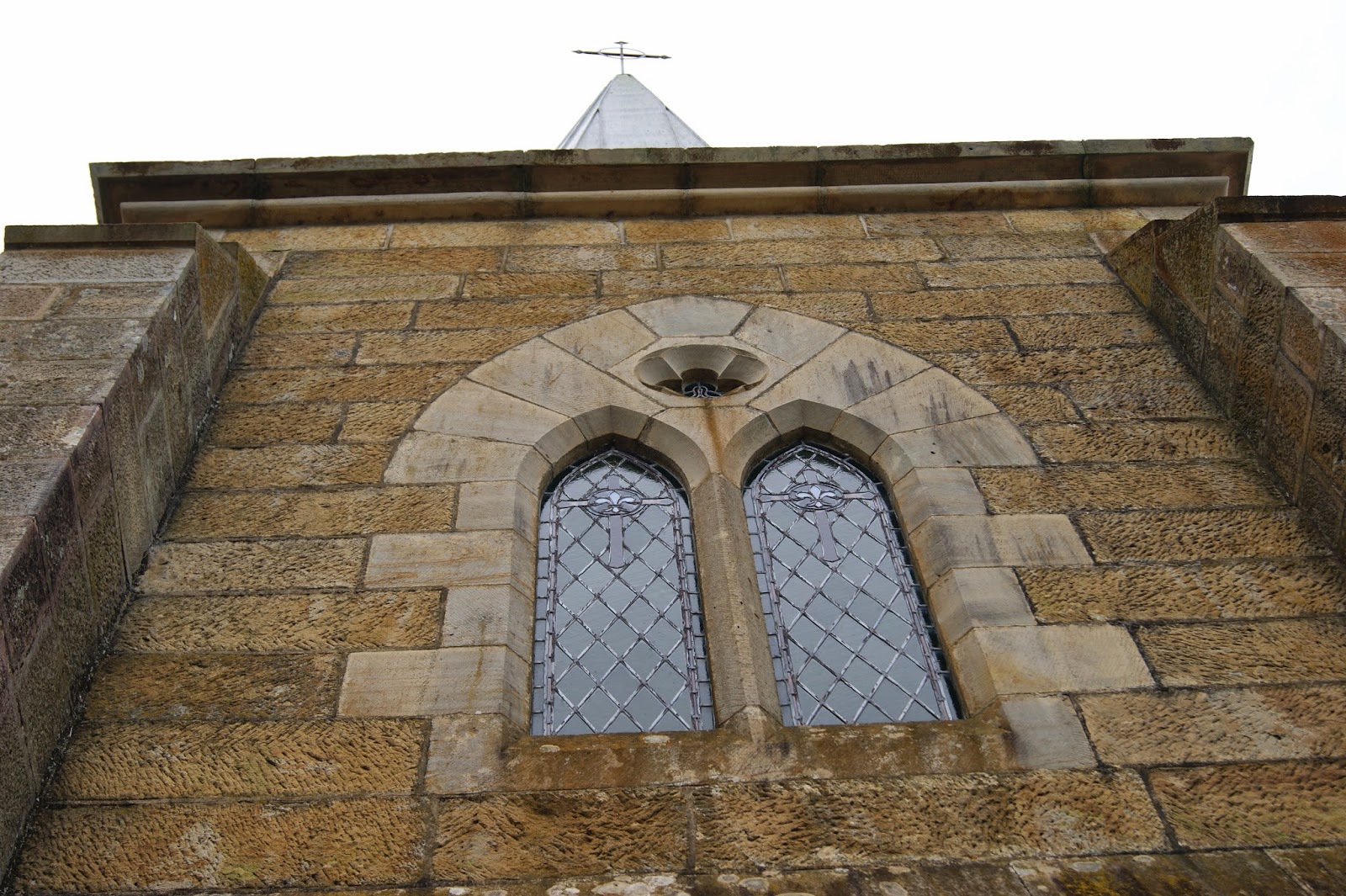 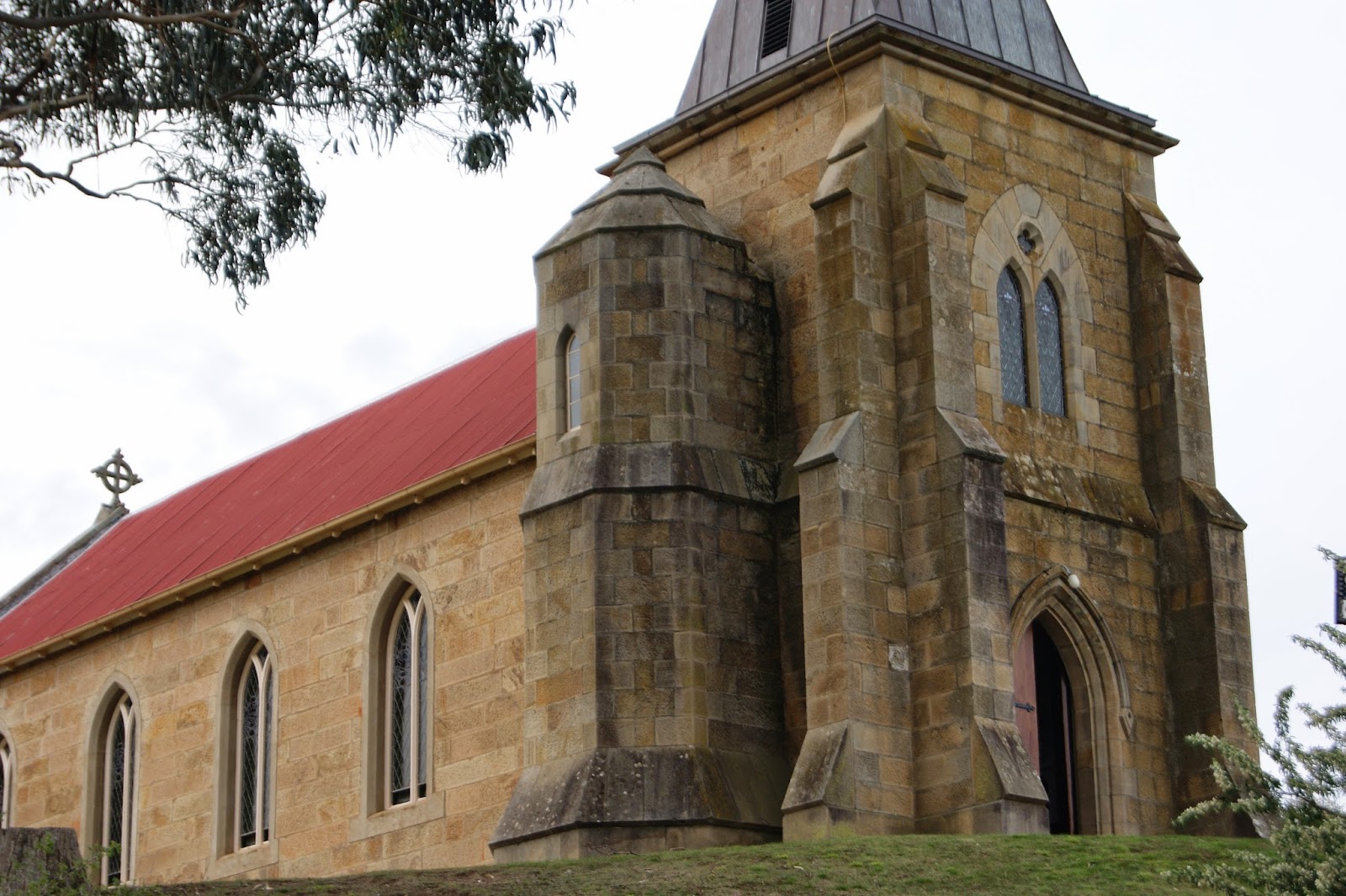 In fact, as early as 1825 the district had the largest Catholic population outside Hobart and Launceston. On 23 August 1835 Polding celebrated Mass in the homestead of John Cassidy’s property Woodburn, a little to the north-east of village. One of a handful of Catholics in Van Diemen’s Land of that period to become large landholders, Cassidy had acquired Woodburn on the banks of the in 1833. Polding gave the Richmond Catholics one of his Goodridge church plans and Cassidy generously donated a parcel of land from the south-western corner of his estate, adjacent to the , upon which to build a church. Before leaving Richmond Bishop Polding blessed the foundation stone for the new church, making this event the first formal act of an Australian Catholic bishop. He departed for on 5 September 1835. 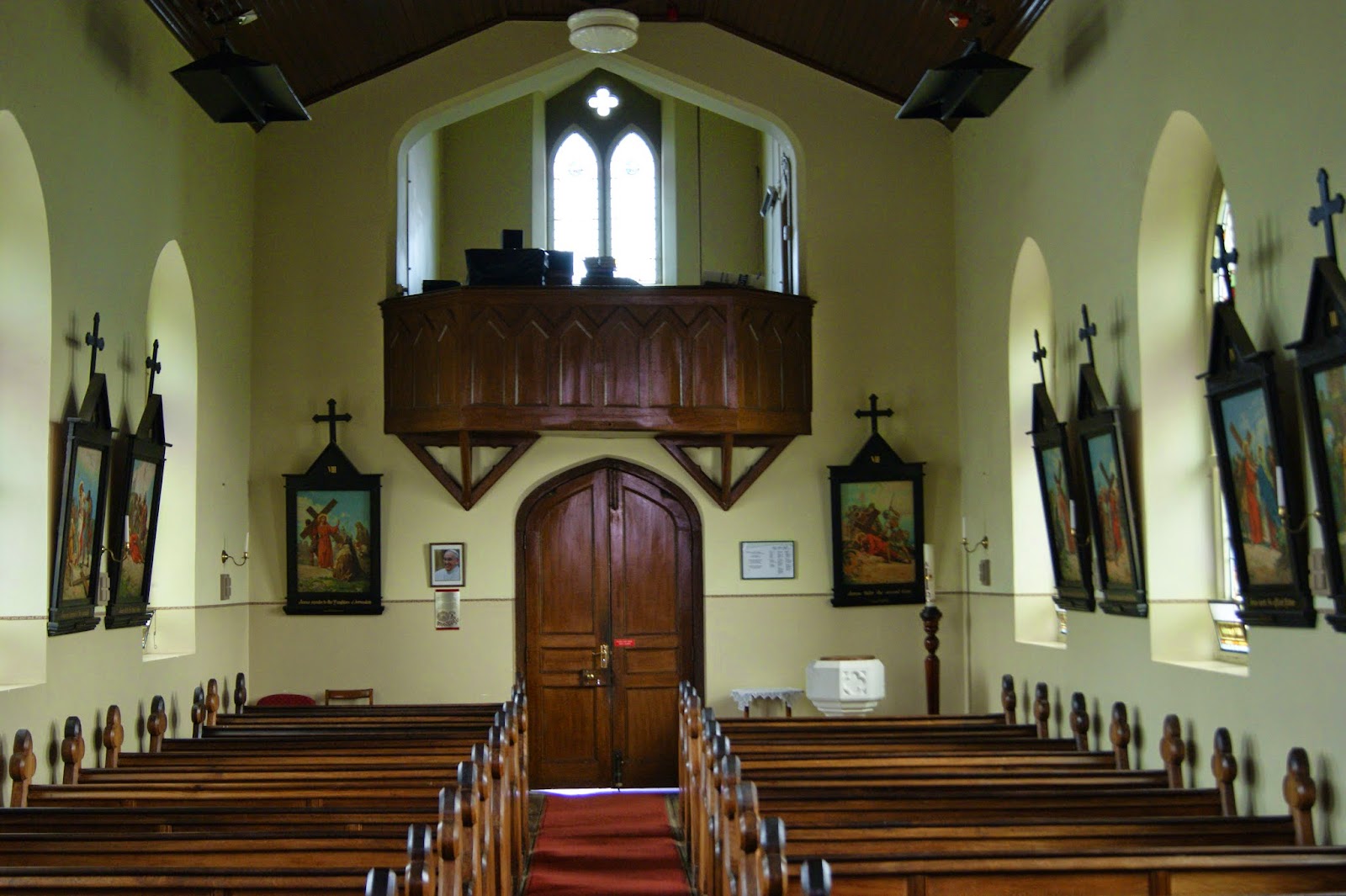 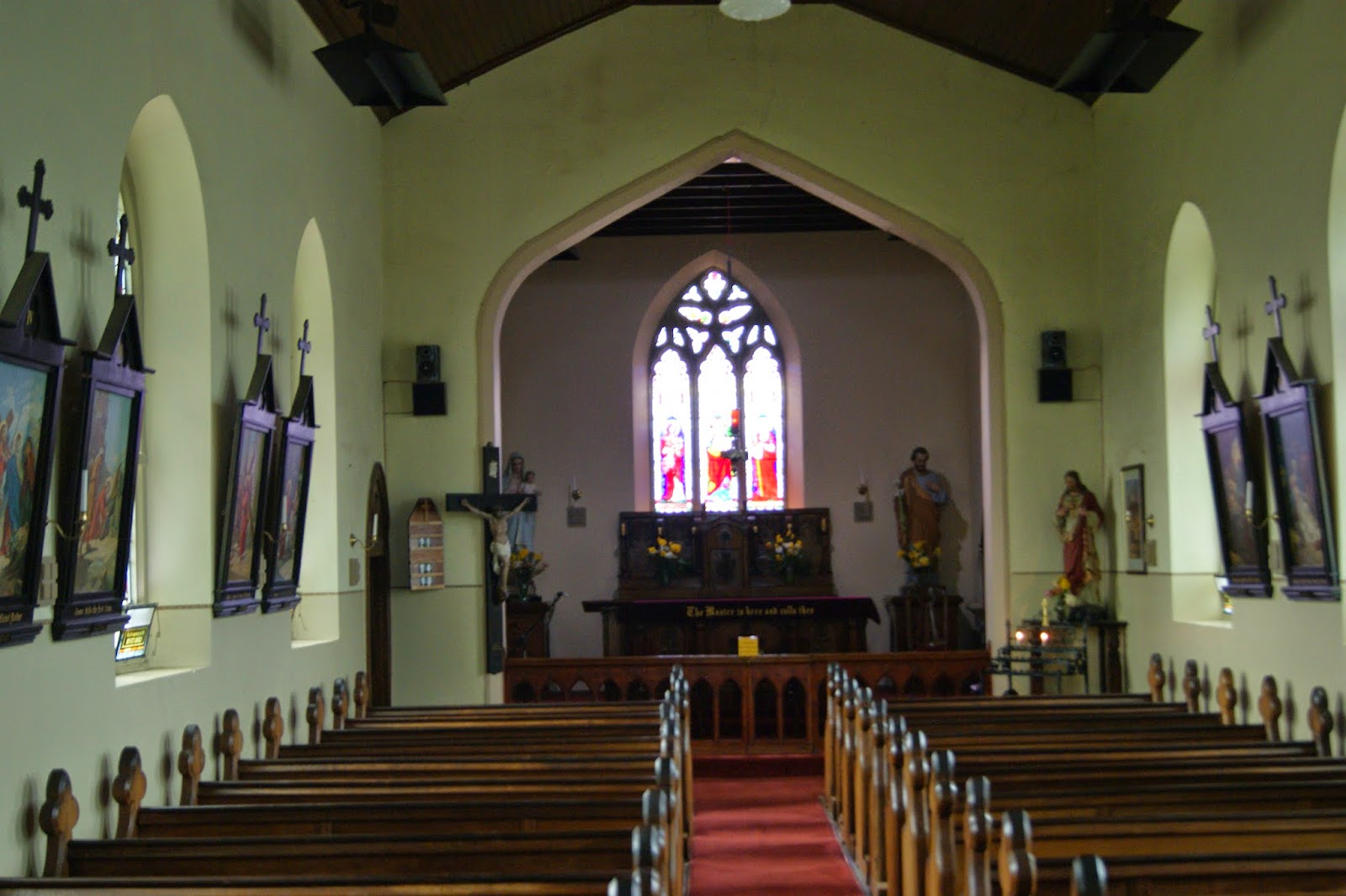 On 21 September a meeting was held to pursue the raising of money to build the church, local residents  subscribing some £700 within weeks. The Colonial government promised a further £500. The successful tenderer, as announced in the Colonial Times, for 22 March 1836, was a Mr. Buscombe. the Evangelist’s Church was opened on 31 December 1837. The first pastor, Fr James Ambrose Cotham OSB, who had accompanied Polding out from in 1835, preached at the Mass which was celebrated by Fr James Watkins. Watkins was at that time temporarily in charge of while Fr Cotham resided in Launceston. A ‘sumptuous repast’ at John Cassidy’s residence completed the ceremonies. 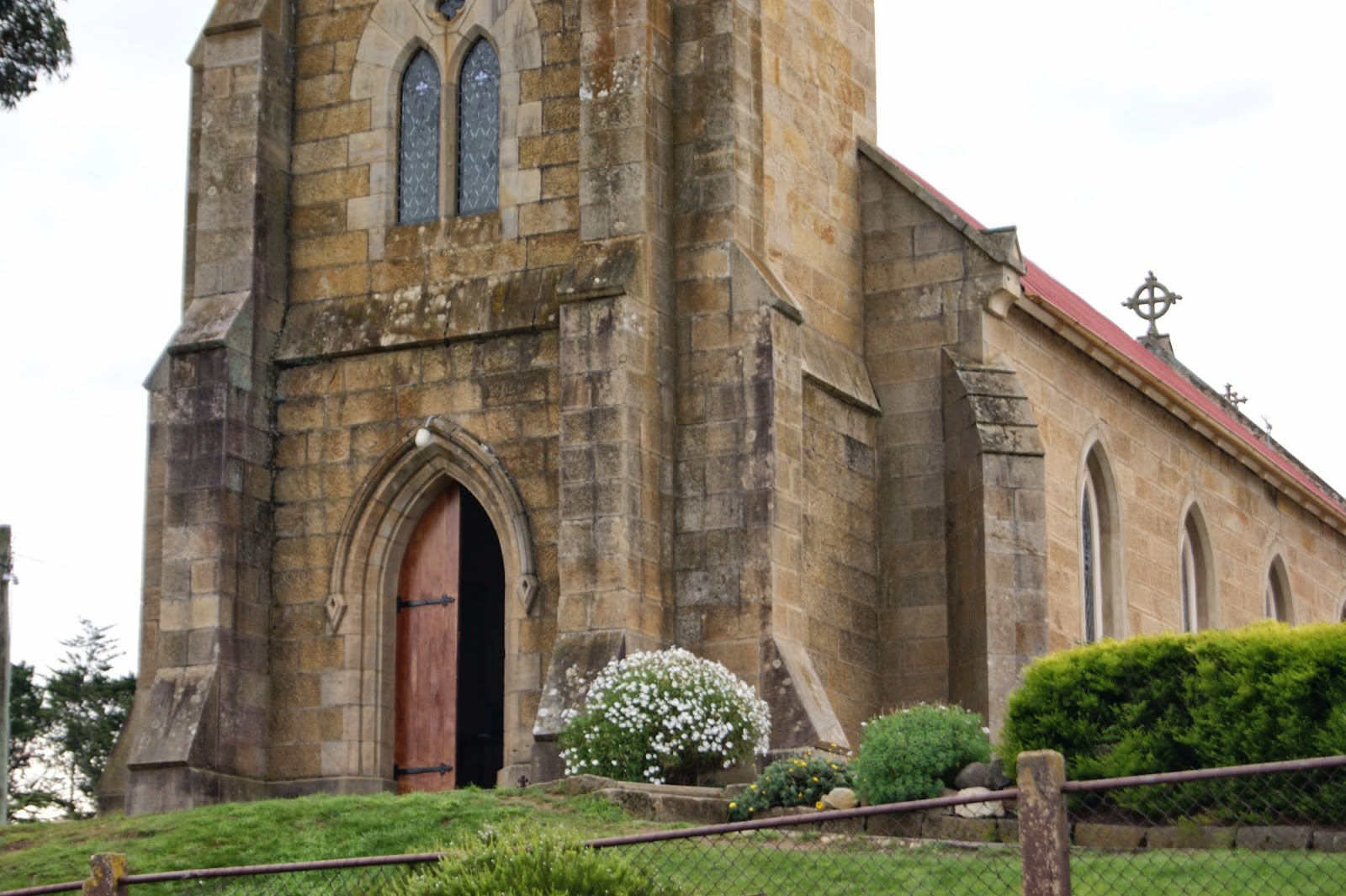 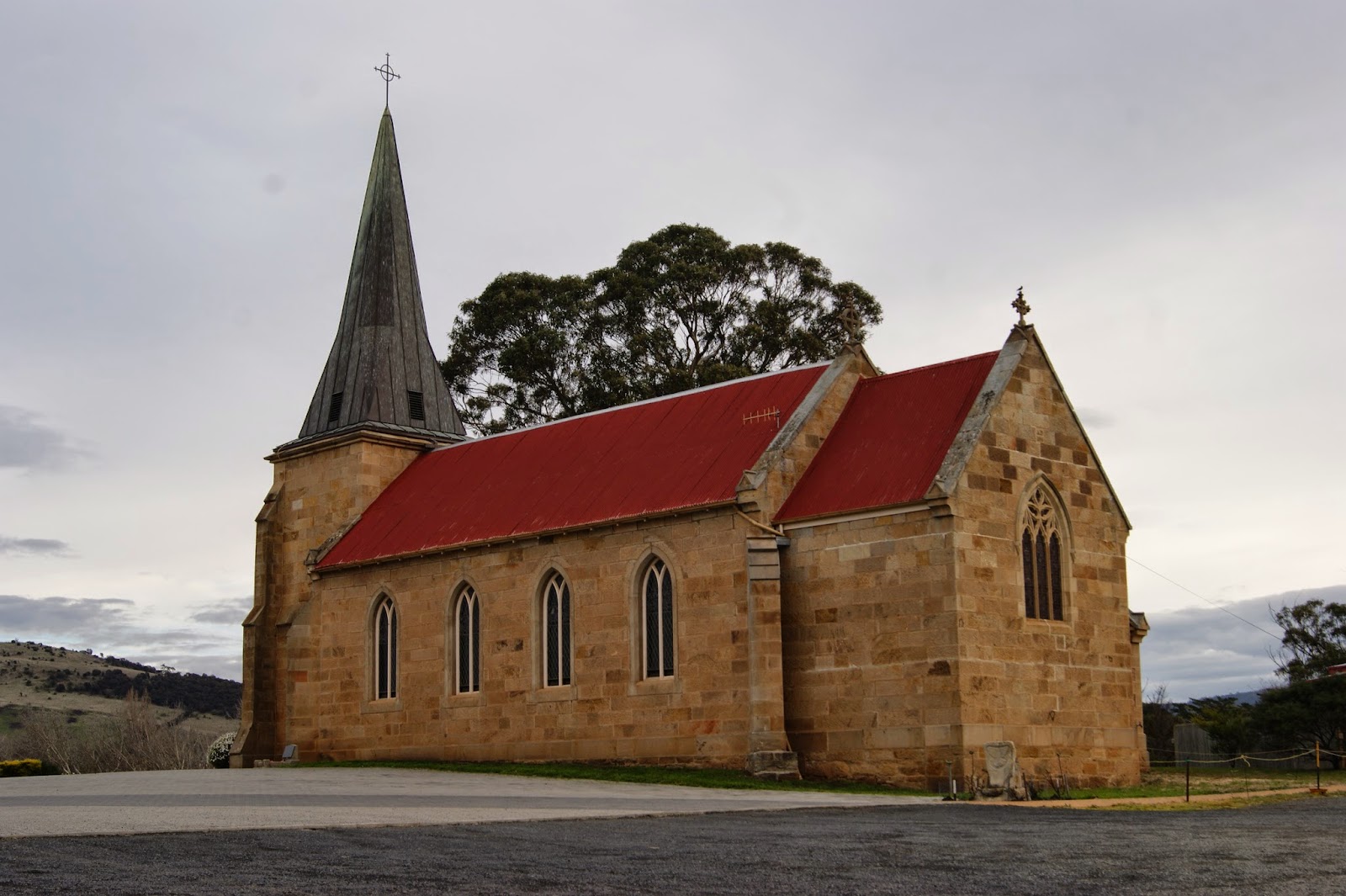 By 1858, Goodridge’s Gothic St John’s, , must have seemed decidedly unfashionable to its pastor Fr William Dunne. Dunne had just erected the charming St Patrick’s, Colebrook, from Pugin’s second church model, so the as-yet unused third model would have presented a potentially useful source of components to convert the existing building into one that was more appropriate, with a chancel, a sacristy, a tower and a spire. The model used for extensions to , , was, like the other two, a scholarly and completely convincing, yet totally original, version of a small English medieval village church. 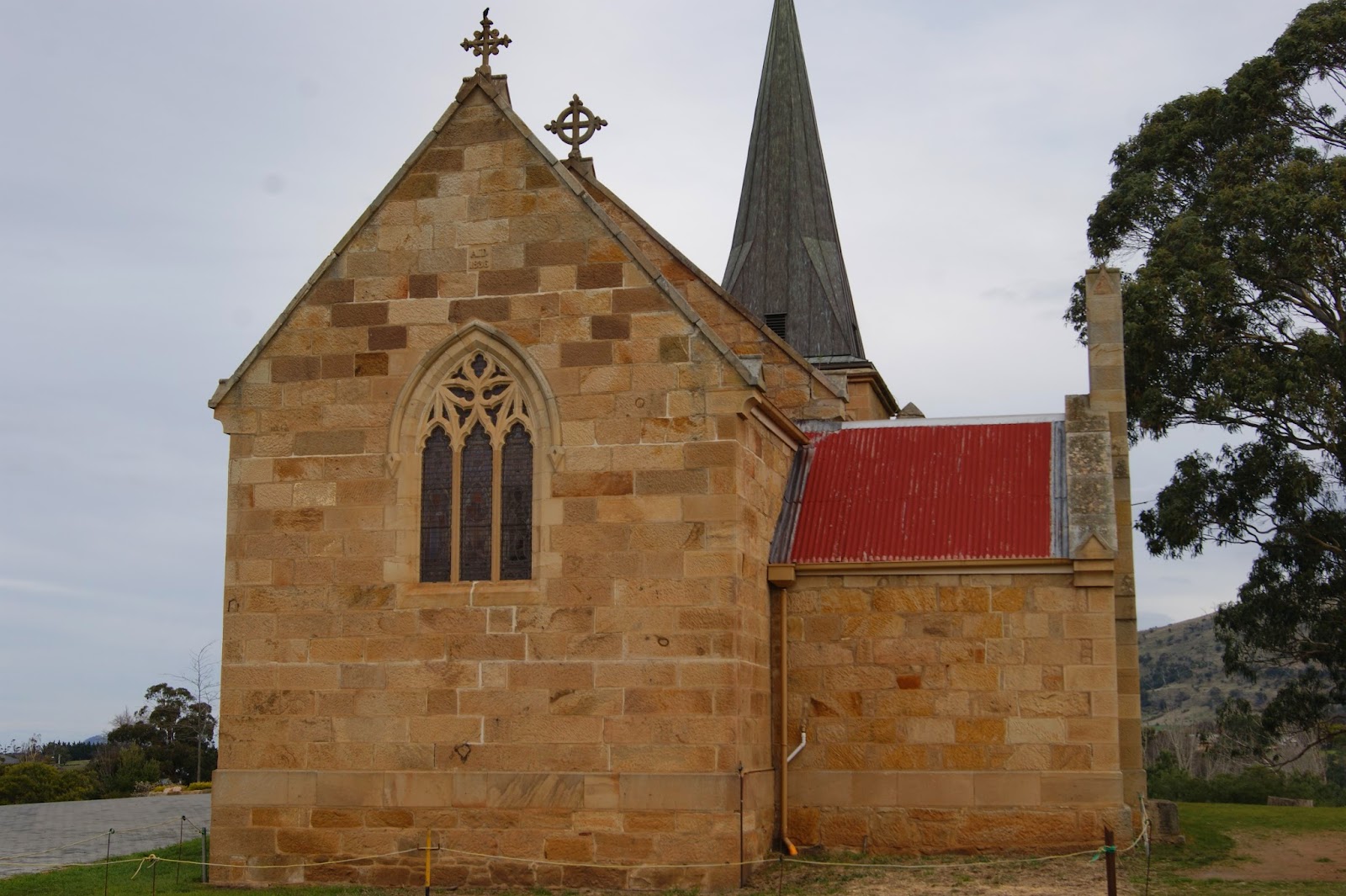 The problem in using Pugin’s model three designs for the extensions was that it was for a church substantially larger than . The architect Frederick Thomas (1817–1885), who had been given custody of the models by Bishop Willson and had drawn up plans from them, was charged with adapting parts of the model. Thomas had been sentenced to transportation to in 1834 for swindling. He was further sentenced in 1842 to fifteen years in a penal settlement for stealing and arrived in in February 1843. 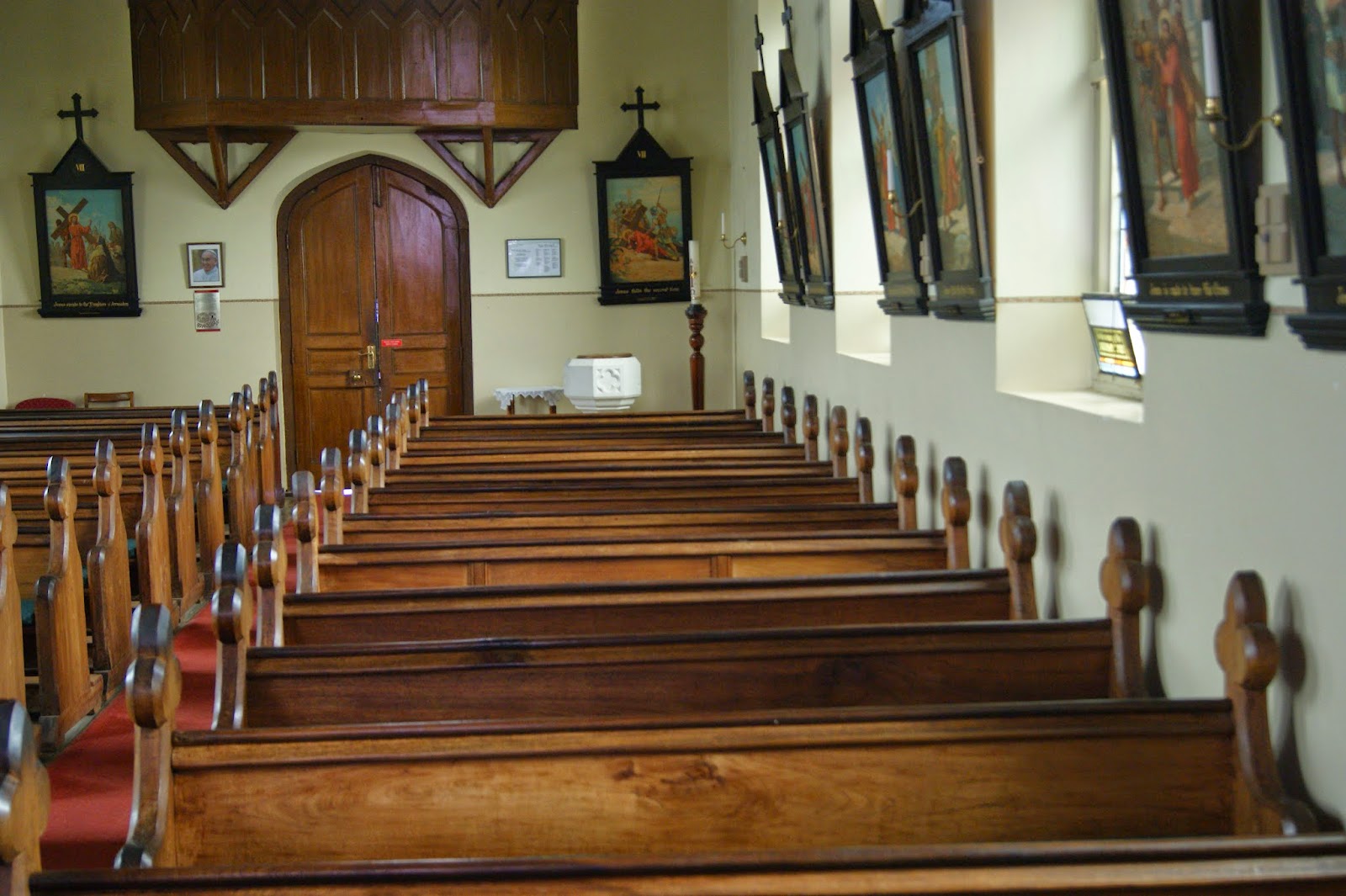 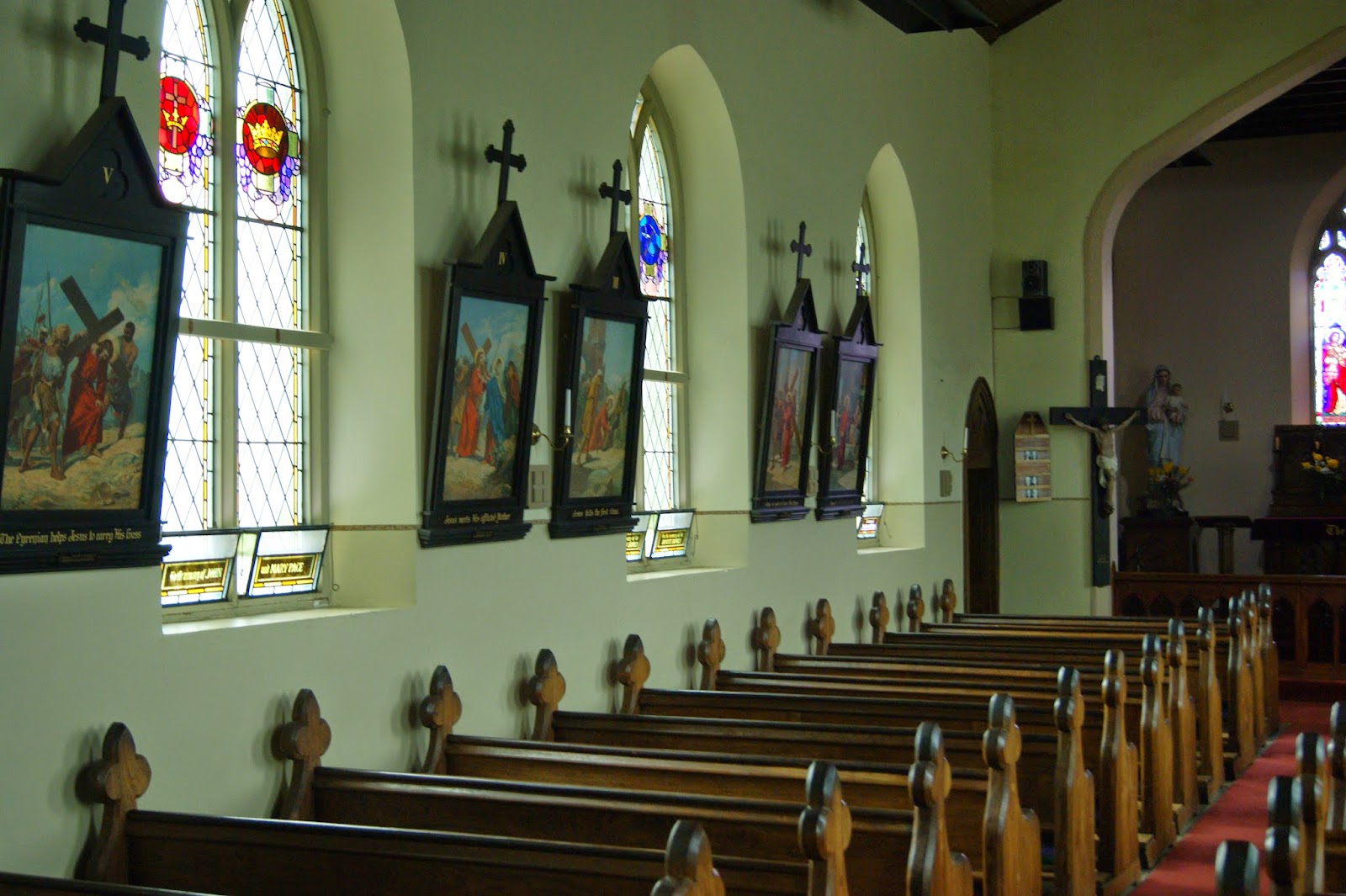 While still on probation he was assigned as an unqualified draftsman and clerk to the Public Works Department on 1 July 1847, and then was later promoted to Senior Draftsman and Clerk of Works.
By 1880 the spire was reported to have developed a dangerous lean. It was a wooden structure of indeterminate cladding. Whether it fell down or was dismantled is not known, but it was replaced in 1893 by a much shorter spire. Designed by Alexander North, the spire had bands of darker imbricate slate and four small gabled openings in the spire as part of its design. It was an intelligent match for the proportions of the Thomas tower below. 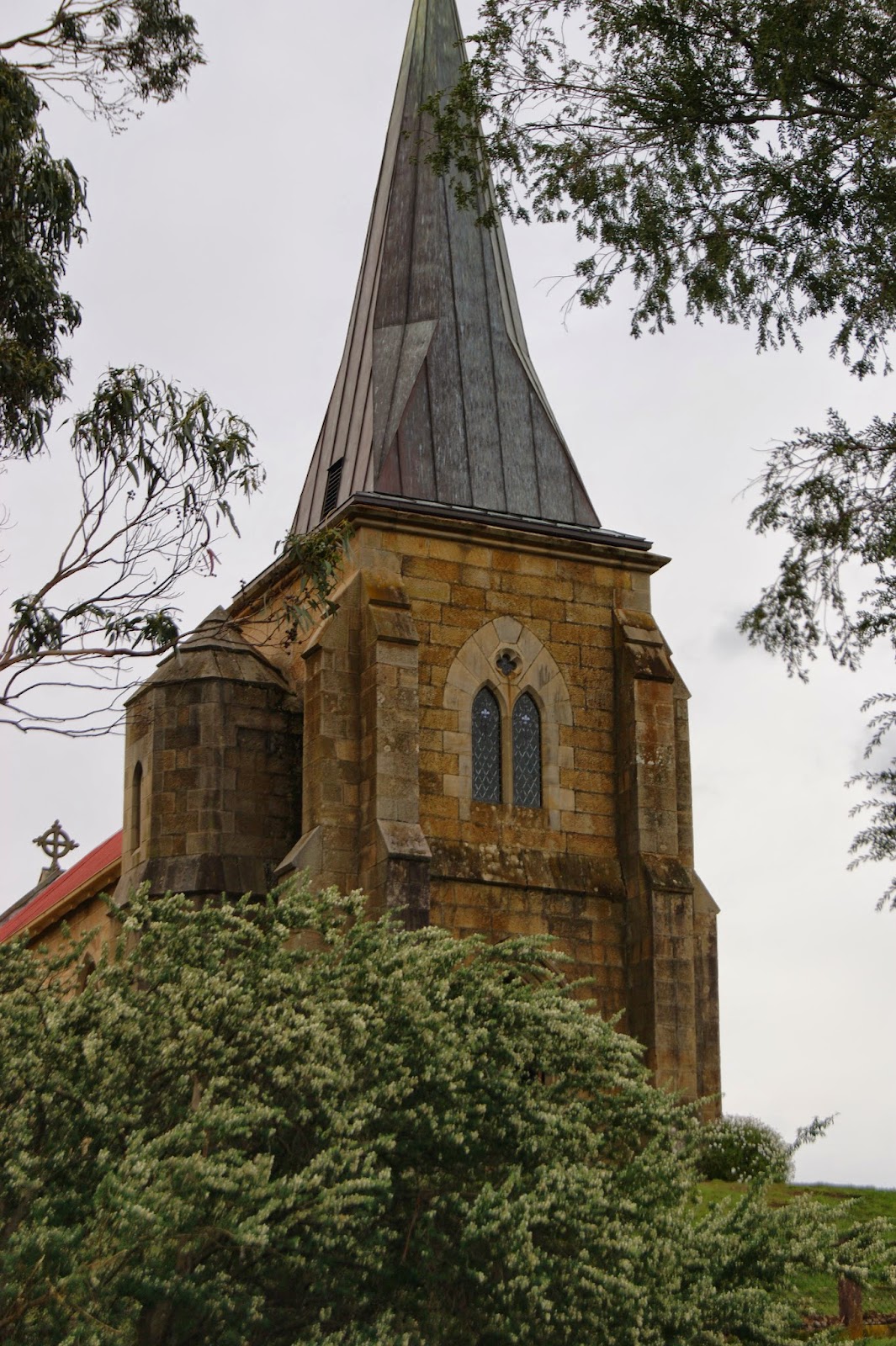 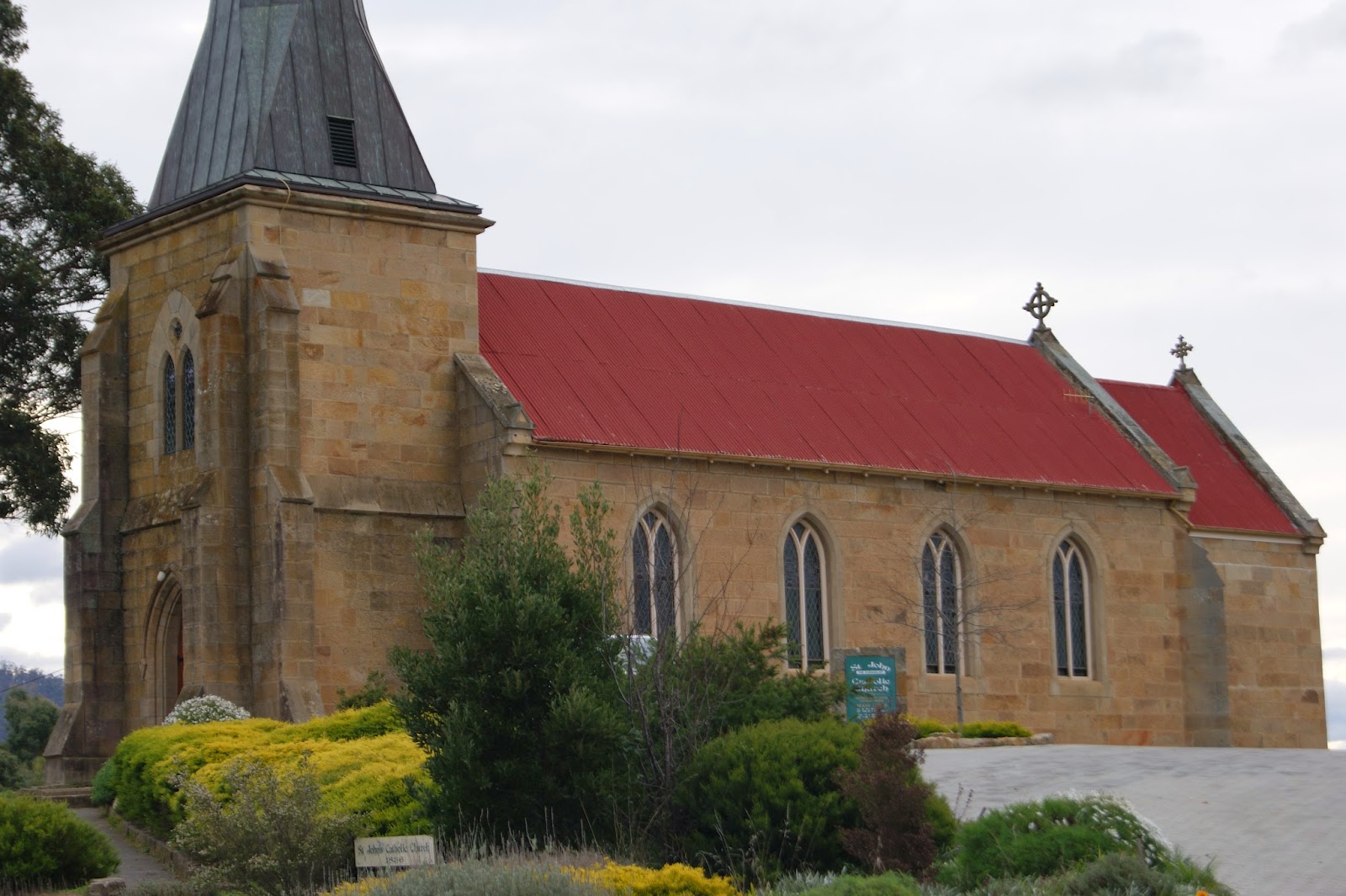 In time, the spire had seriously deteriorated and it was replaced in 1972 by a copper-clad version of the original model three spires, designed by architect Rod Cooper but reduced in size to better match the tower height. It is capped by the North cross. In 1928–29 there was a major renovation of the building. Although much of this concerned the furnishings, works were carried out on the structure, including repair and re-pointing of the stonework, installation of a wooden ceiling replacing the plaster one, remediation of the chancel floor and the cutting of a door in the west wall of the sacristy replacing the original two windows. 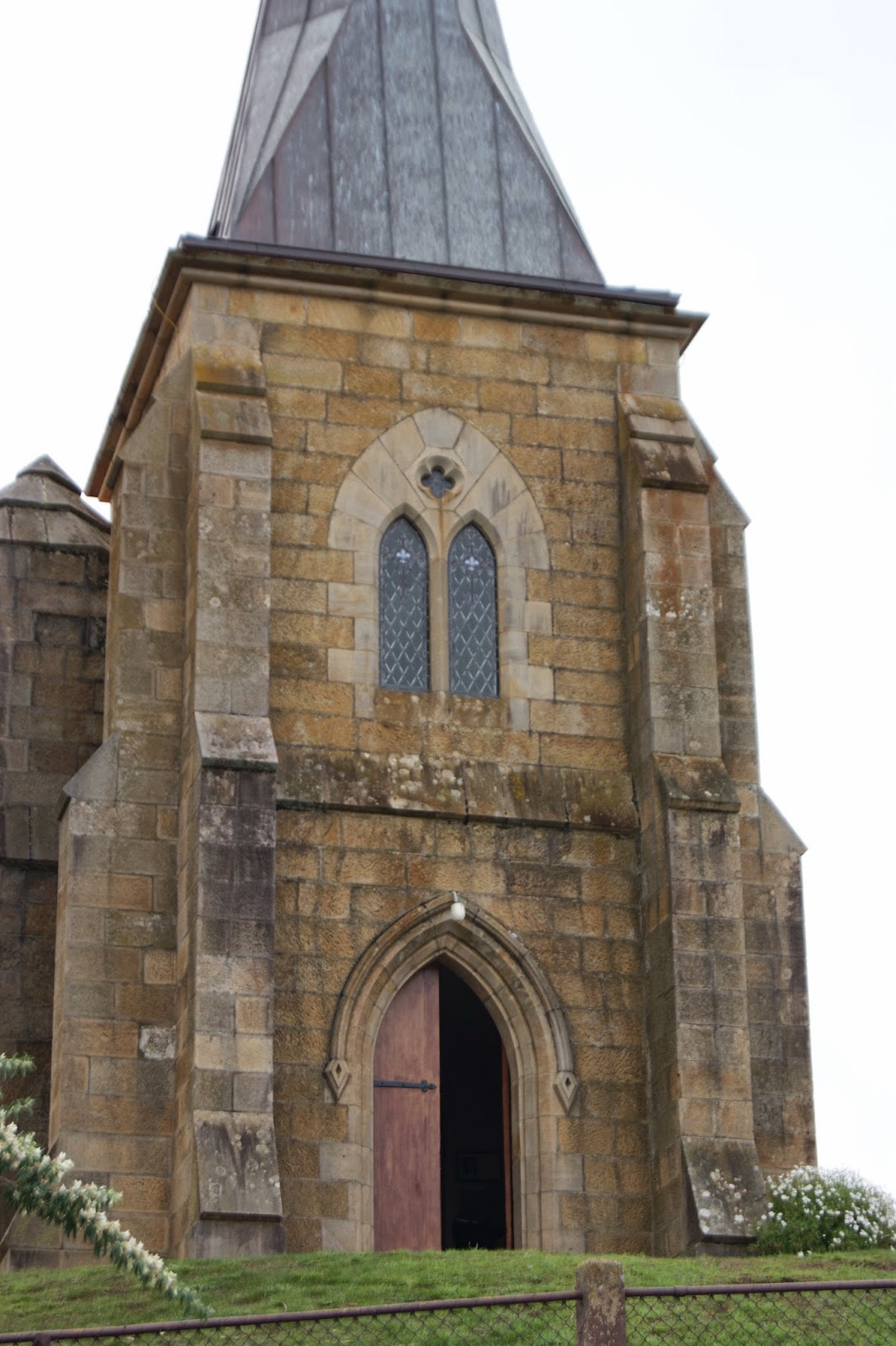 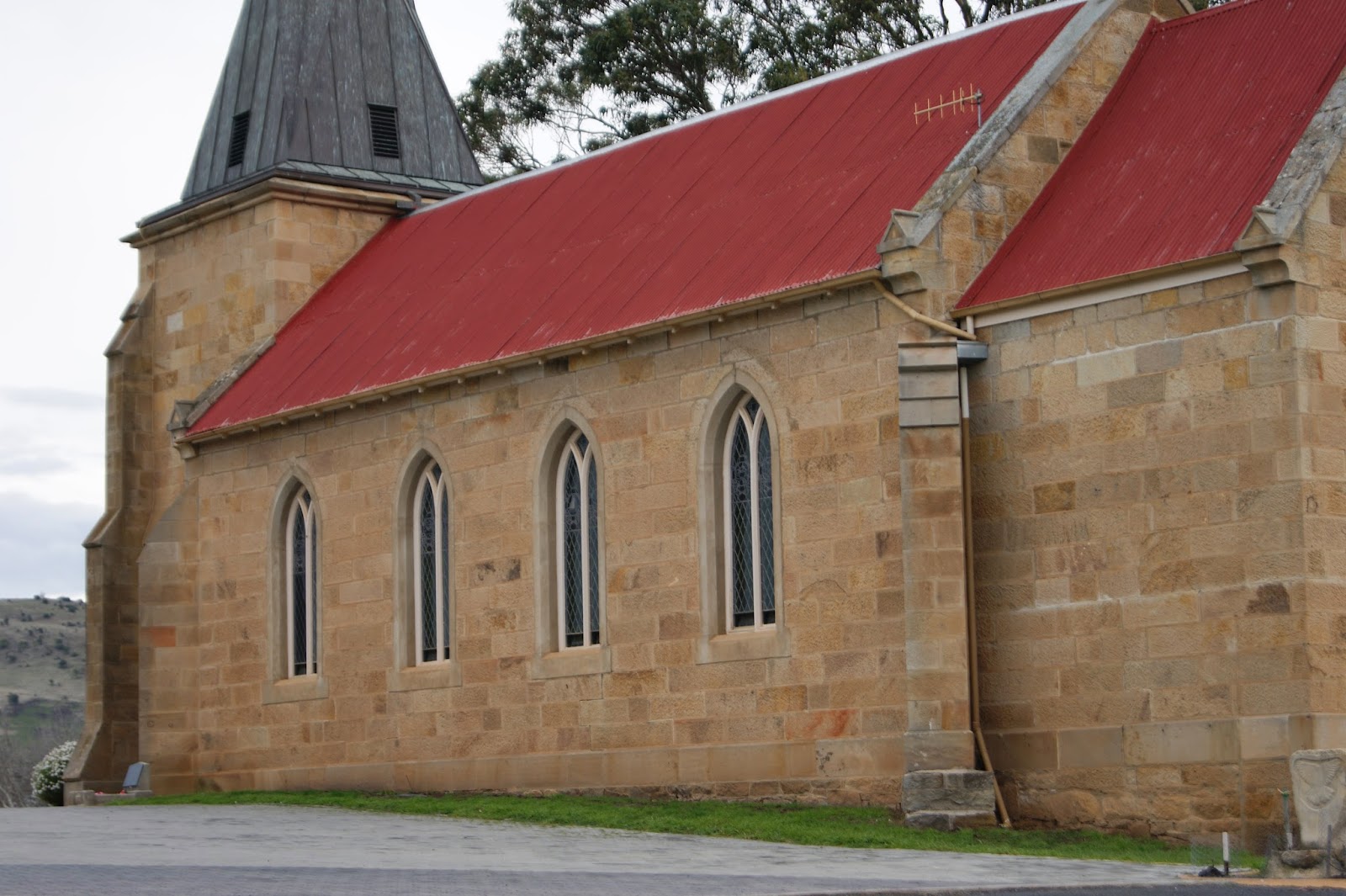 is commonly dubbed ’s oldest Catholic Church, although that statement may need some qualification. The foundation stone for St Mary’s Cathedral (in Sydney NSW) was laid in 1821 by Governor Lachlan Macquarie, but in 1865 the original chapel was ruined by fire. 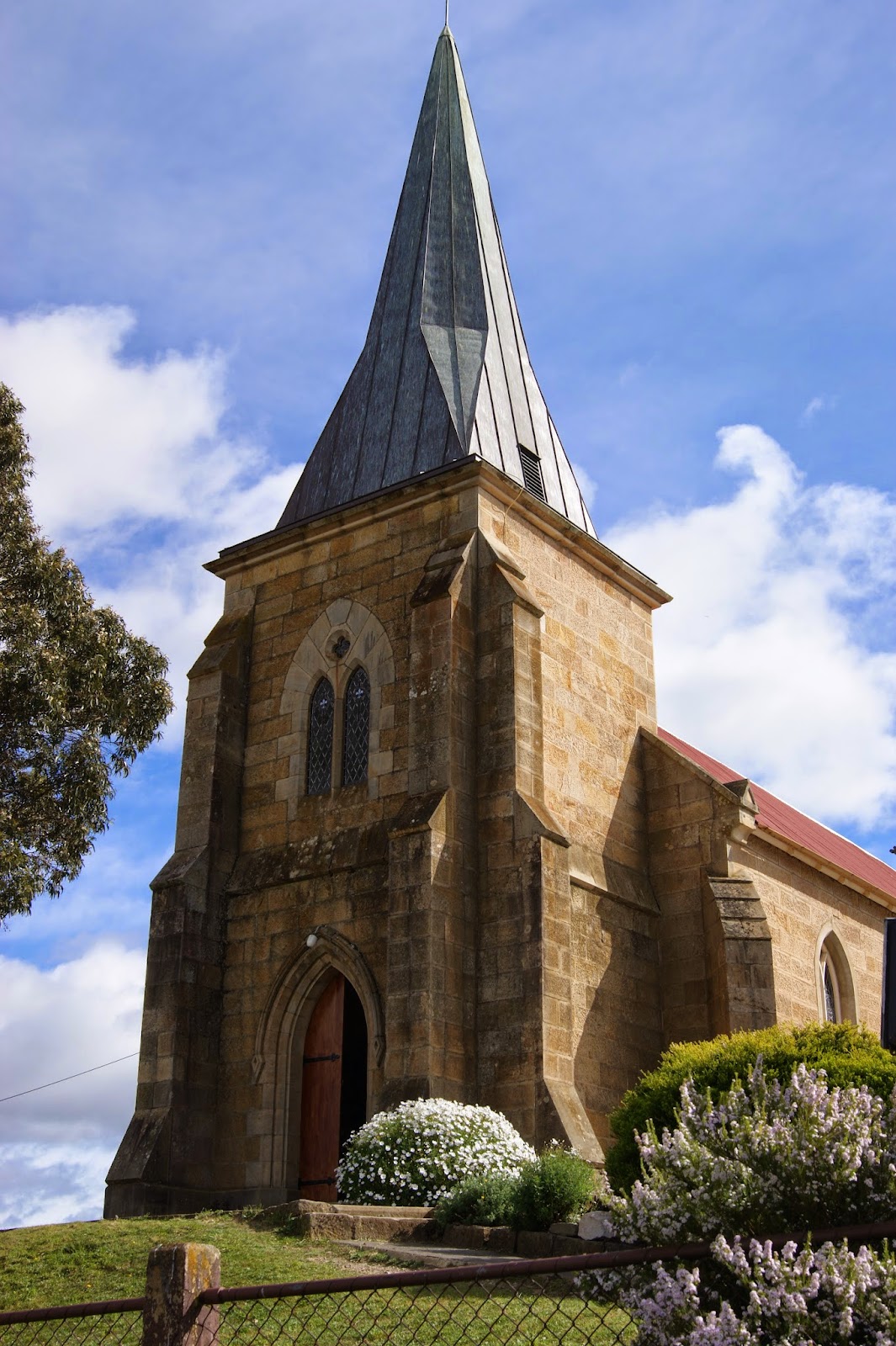 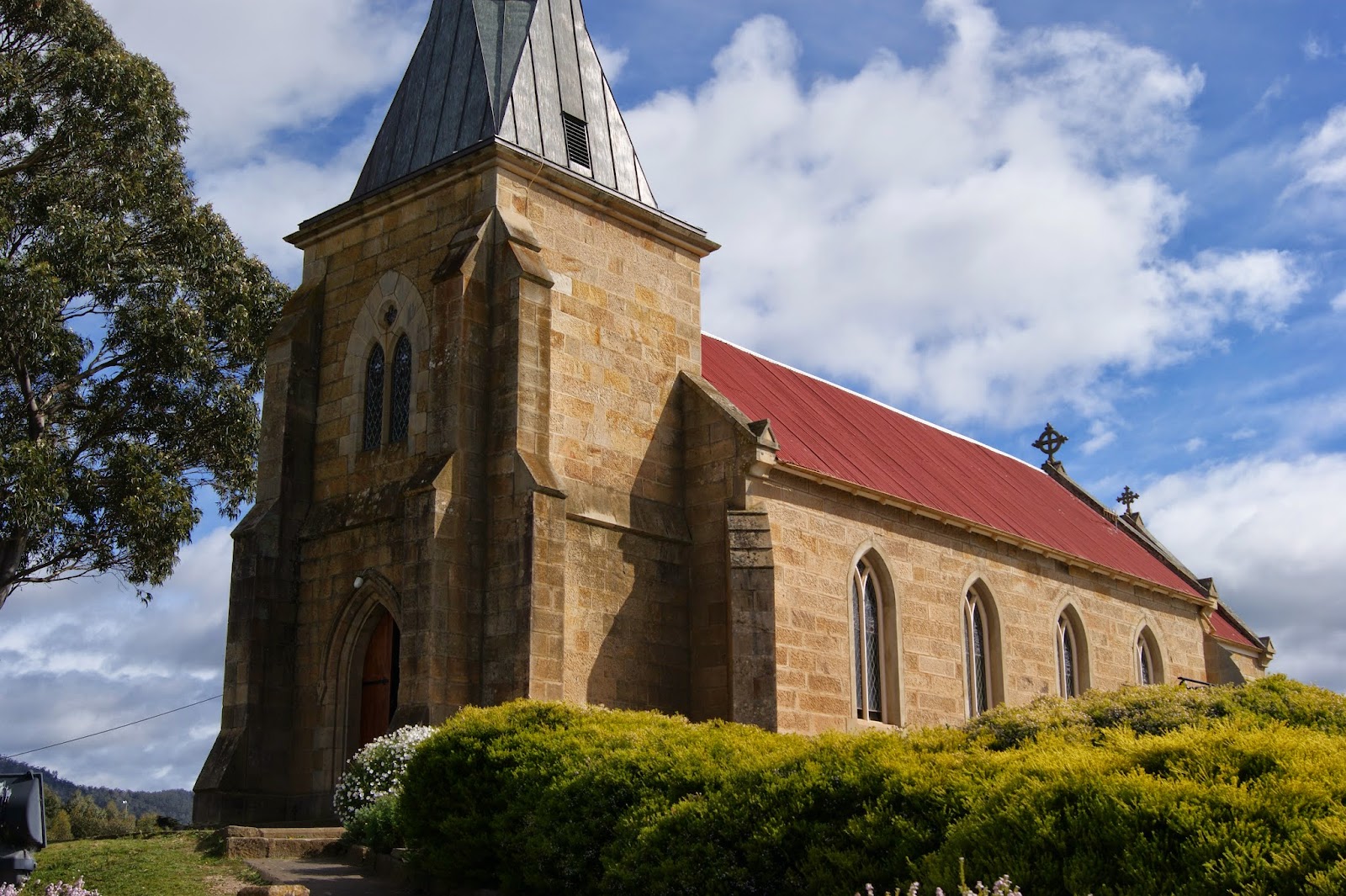