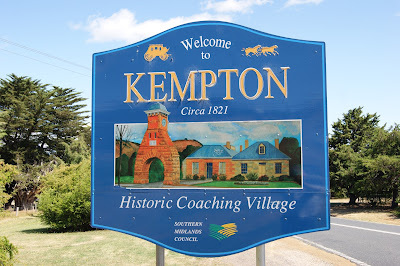 A small and charming colonial settlement which is registered as a classified historic town, Kempton is located 49 km north of just off the .
The district was first settled by Europeans in 1814 and was known as Green Ponds - a name which is still retained as the local municipality. In 1816, Anthony Fenn Kemp, a thoroughly unpleasant and despotic soldier-merchant, who seems to have spent most of his life fighting with governors and trying to manipulate the political scene in both New South Wales and Van Diemen's Land settled in the district. 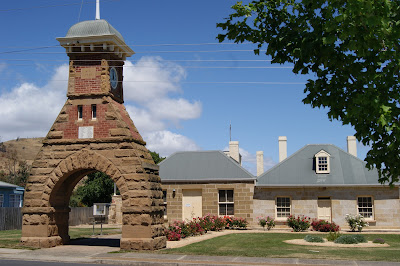 Kemp arrived in in 1795 and served two years at as a commissioned ensign in the New South Wales Corp. In 1799 he established a shop on the corner of King and George Streets in where he managed, due to his privileged position as treasurer of the Committee of Paymastership, to sell goods to his fellow soldiers at huge profits. One contemporary report suggests that he bullied his fellow soldiers into buying from his shop and marked up his goods by 100 per cent. Attempting to maintain this lucrative sideline he ended up brawling with Governor King over a shipload of brandy, waged a pamphlet war against Governor King, and was instrumental in the overthrow of Governor Bligh. 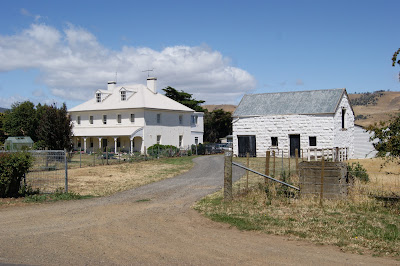 In 1804 he was appointed second-in-command at Port Dalrymple (Launceston) and from August 1806 to April 1807 was in charge of the infant colony. He settled in in 1816 and by the 1830s, through a combination of grants and purchases, had 4100 acres in the Green Ponds area. It was here that he established and developed 's infant wool industry, bred horses and cattle, and introduced a hardy, North American, variety of corn. In some quarters he is known as the 'Father of Tasmania' but this has much to do with the fact that his family (who married extensively into the upper echelons of Tasmanian society) consisted of seven sons and eleven daughters. 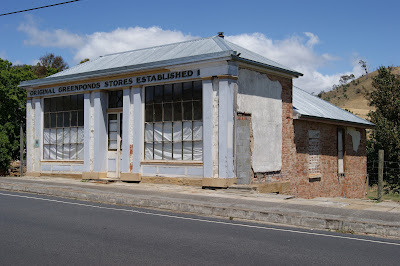 It is not surprising, given the size of Kemp's holdings, that Green Ponds was renamed Kempton in 1838 and the Main Road ran through the town and brought rapid development to the district. The construction gangs of convicts and their military guards provided an incentive for local farmers and pastoralists to produce food . Two convict stations were situated in Kempton; one on land where the Church Glebe is now and the other at Picton, three miles (6 kilometers ) to the north. Military units were housed in barracks on the present Glenfern estate close by to where a new reservoir has been built. 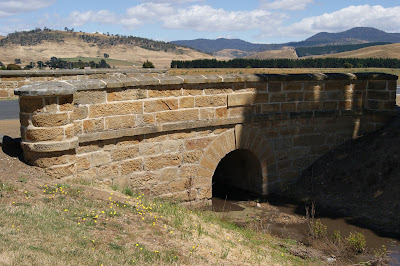 Kempton had a flour mill, brewery and numerous lodging houses and hotels. After the end of transportation the town continued to be a centre for agricultural activities from the numerous farms and properties. Share farming was practiced on some of the larger properties by small farmers. Two groups who settled on the east and west of Kempton were Irish and Scottish immigrants whose farms were known as Irishtown and Scotchtown. Like many small farmers throughout the state, they have now all gone and their farms have become part of larger properties. 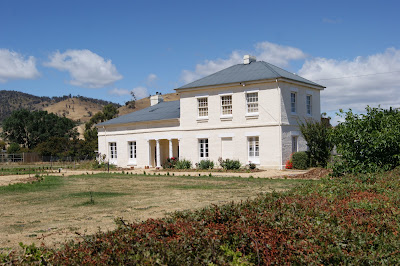 The now bypasses Kempton, however, it is worth stopping by to explore. Drive or walk down Kempton’s main street and take in the 19th century atmosphere as you pass the inn, church, shops and Dysart House. Located at the southern end of town, Dysart House is an exceedingly handsome mansion, which is now privately owned. 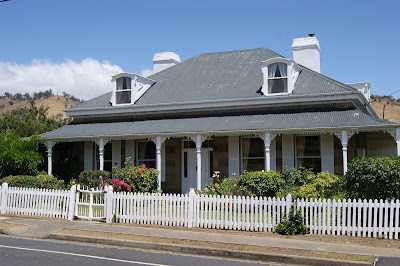 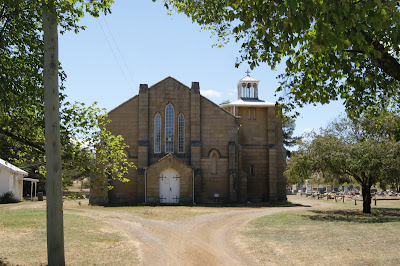 The major historic buildings in the town include the National Estate listed St Mary's Church of England, a sandstone Gothic Revival building which was probably designed by James Blackburn. It was completed in 1844 and is notable for its square tower, its interesting cemetery, and its position as a central feature of Kempton's townscape.
Congregational Church 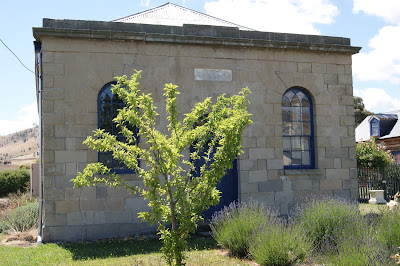 Nearby is the Congregational Church (1840) which is a simple stone Georgian church which also has an interesting old cemetery.
Wilmot Arms Inn 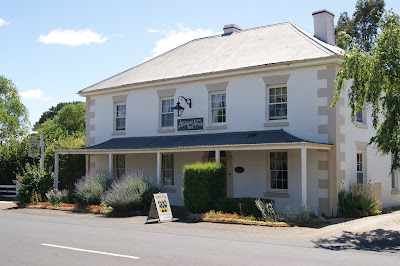 The Wilmot Arms Inn (1844) in the was built by convicts and operated as a licensed inn until 1897. It is said that the proprietor suddenly got religion and stopped making alcohol and fed all his spirits to the pigs. From 1897 it became a private residence. It fell into disrepair but was restored in 1978. Today it is part of 's Colonial Accommodation circuit.
Dysart House 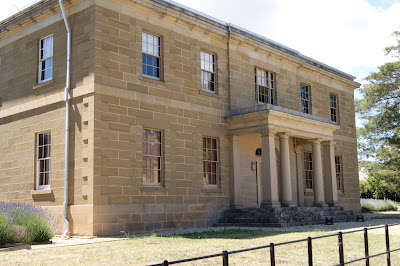 Another coaching inn in the area was Dysart House (now a private residence) a large two storey Georgian stone inn which was built in 1842. It is recognised as one of the finest coaching inns on the old . Built in 1842 with no concern for expense, the original inn offered fine accommodation for travellers and their steeds. The impressive stables once provided shelter for 22 horses. The ballroom was the venue for many a glamorous occasion. A peephole in the door hints at more scandalous behaviour! 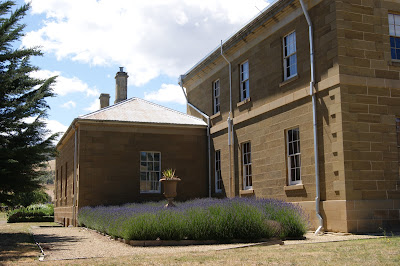 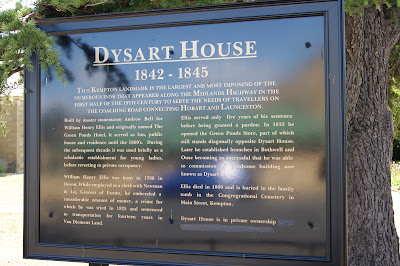 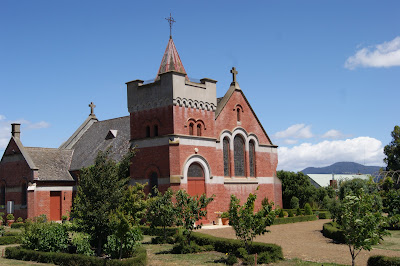 St Peter's was built in 1918 to replace an earlier wooden chapel in Louisa Street. Originally it had been intended that the church would cost 1600 pounds but by the time the church was finished in 1923, the costs had blown out to 3400 pounds. Although now deconsecrated and privately owned, the building stands as testimony to the strength and conviction of Kemptons Catholic community. 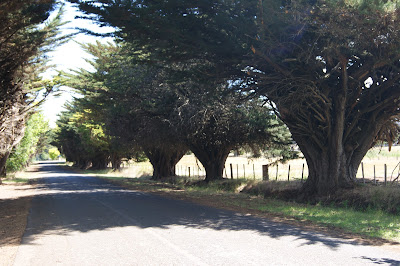 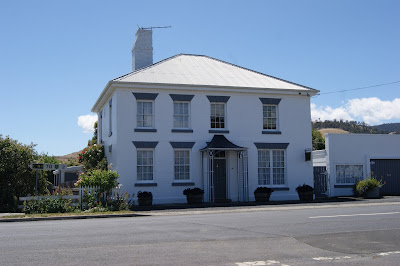