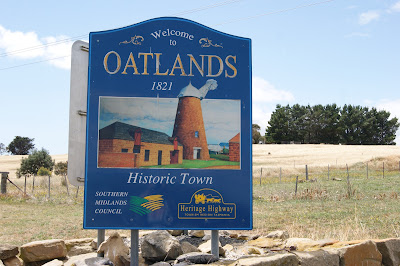 The historic and beautiful township of Oatlands is located 79 km north of Hobart and 115 km south of Launceston on the Midlands Highway (Heritage Highway).
The area was first formally explored by Europeans when Governor Lachlan Macquarie and his party passed through in 1811. It was another decade before Macquarie returned to the district. On the second visit he recognised the present site as 'a very eligible station for a town' and, according to a local plaque, he named the town 'Oatlands' on 3 June 1821. The name reputedly referred to a rich grain-growing area of Macquarie's native Scotland. 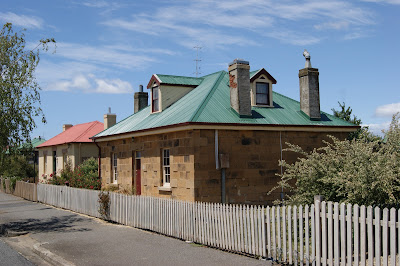 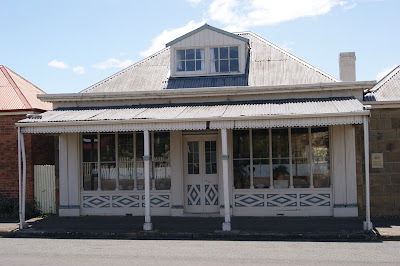 Oatlands' importance was guaranteed in 1821 when Macquarie decided to establish a road from George Town (at the time it was known as Port Dalrymple) to Hobart. A number of military posts were established along the road and Oatlands was chosen as one such site. It was developed as a military base for the control and management of convicts because of its central location between Hobart and Launceston. Convicts were assigned to nearby farms and properties, and also worked on public buildings, roads and bridges.
In the following five years a few settlers moved into the area but it wasn't until the arrival of a military detachment in 1825 that it began to develop. 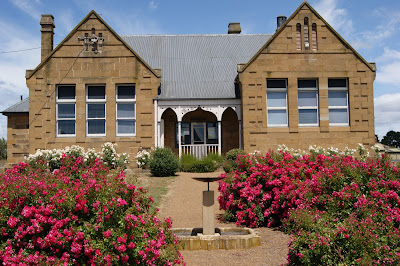 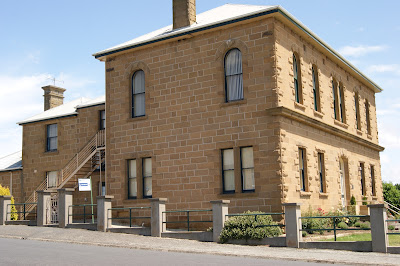 The early history of the town is a reminder that the local Aborigines did not give up their land without a fight. Lieutenant-Governor George Arthur's decision to lay out a town meant that some 35 workers were sent to the town to construct buildings, clear the ground and create new roads. This small group was at such risk from Aboriginal attack that the troops were sent to guard them. It should also be remembered that Arthur had a rather fanciful notion of rounding up all the Aborigines on Van Diemen's Land and that Oatlands was the centre of these operations. They were famously unsuccessful, spending vast numbers of hours and resources. The Aborigines simply slipped through the infamous 'Black Line' each night and the troops returned after weeks of hunting down the indigenes with only a small boy and an old woman to show for their labours. 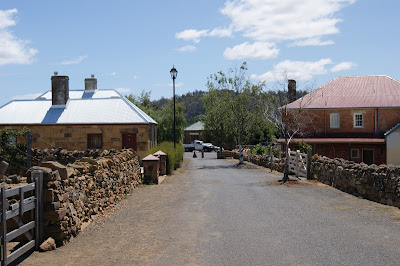 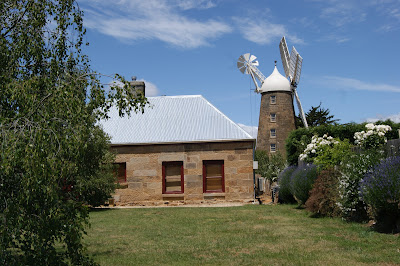 In 1832 the town was surveyed by Surveyor Sharland who, believing that Oatlands would eventually become one of Tasmania's major centres, marked out more than 80 km of streets.
There are a number of unique landmarks in Oatlands, including the Callington Mill (See Callington Mill post) http://ontheconvicttrail.blogspot.com.au/2013/01/callington-mill-oatlands.html and St Pauls' Church. The mill was built in 1837 and was restored to working order during June/July 2010, and the Catholic Church was designed by Augustus Welby Pugin, the father of Gothic Revival architecture.
For some years after 1848, Oatlands was the place of exile of the Irish nationalist leader Kevin Izod O'Doherty, where his stone cottage still stands.
A railway connected Oatlands with Parattah Junction, on the main Hobart to Launceston line. The railway opened on 13 May 1885 and it closed on 10 June 1949.
In the next decade the town grew rapidly so that it now has arguably the finest concentration of Georgian buildings of any town in Australia. 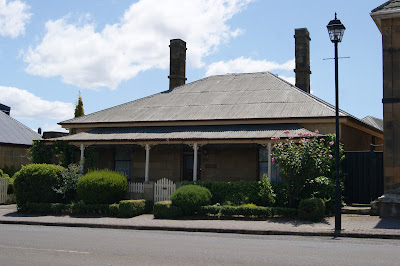 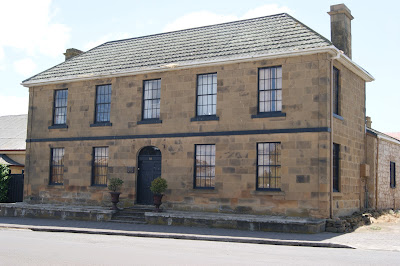 The Oatlands Court House is an historic Georgian building in Oatlands. Built by convict labour in 1829, the Oatlands Court House is the oldest supreme court house in rural Australia and the oldest building in Oatlands. This fine example of a Georgian public building was originally constructed as a combined Chapel and Police Office. It was purchased by the National Trust in 1977. 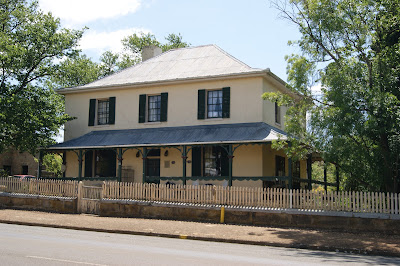 In the 19th century Tasmania’s historic Midlands was home to pioneering farmers, convict workgangs and bushrangers. It was also the home of the colony’s most notorious hangman, Solomon Blay.
In addition to working the gallows at the local Oatlands jail Blay also performed his trade at the Hobart Penitentiary, over 80 kilometres (50 miles) away.
According to local legend Blay’s wages were so low that he could not afford a horse and he was so reviled that no stagecoach would pick him up. Not only was his job as hangman one of the worst occupations in colonial Van Diemen’s Land, but Blay was so despised he would have to walk, swag on back, for three days to reach Hobart Town and the gallows at the Old Hobart Penitentiary (the very same gallows are still on display at the Campbell Street site). (See Penitentiary Chapel post) http://ontheconvicttrail.blogspot.com.au/2012/12/penitentiary-chapel.html 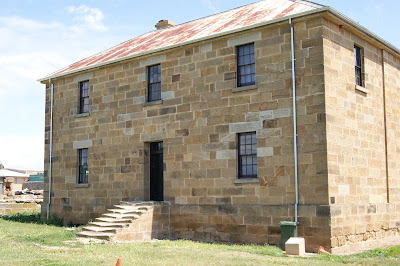 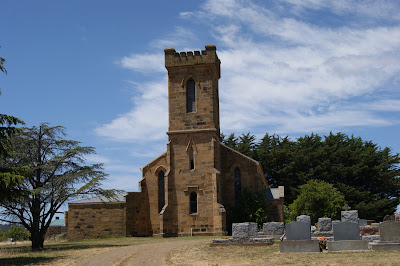 Oatlands was generally a relatively prosperous town in the 20th century but by the 1990s the Tasmanian economy slump, the highway bypass and a Tasmanian Midlands rural drought had a very negative effect on the town. Much of Tasmania's economic renewal, like the highway, has bypassed Oatlands, along with Ross, Tunbridge, Kempton, and soon to be Pontville, which today is a lot quieter than it used to be. The residents are attempting to grow the town once more by making it a peaceful local centre with a tourist friendly image. Oatlands is also home to the world renowned Casaveen Knitwear. 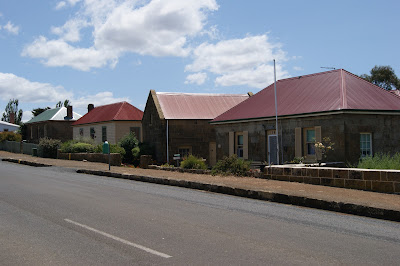 Modern Oatlands is a service centre for the surrounding farming community. It has the usual array of modern facilities which blend successfully with the town's historic past. Oatlands has the largest collection of sandstone buildings in a village setting in Australia. The town’s authentic colonial character is reflected in the original sandstone buildings along the town’s main street. With over 150 sandstone buildings, it has the largest collection in any Australian town, many built by convict labour. Its intact Georgian townscape offers a complete representation of the architecture, urban design and the cultural heritage of early European settlement in Australia. Many of its old cottages are now cafes, antique stores or restaurants. The Midland Highway bypasses the town these days, but it's worth taking the short detour to spend some time in Oatlands. 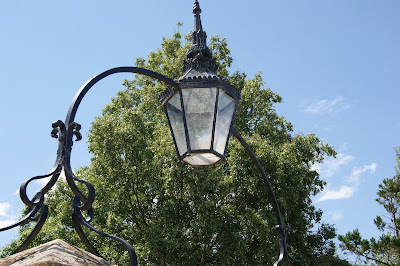 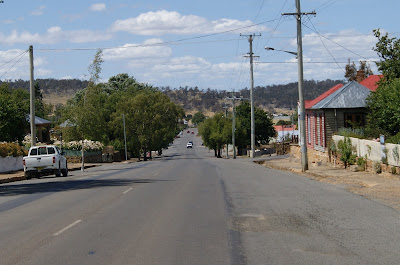