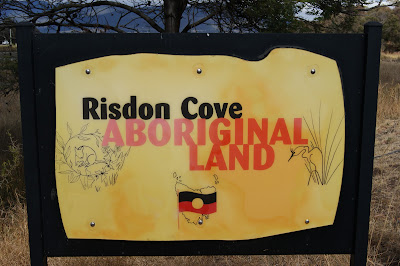 Risdon Cove is located on the east bank of the Derwent River, approximately 7 kilometres (4 mi) north of Hobart. It was the site of the first British settlement in Van Diemen's Land, now Tasmania. It was the French which prompted British settlement of Van Diemen’s Land (VDL). Sydney of course was settled in 1788 when the French were active in the Pacific Ocean. By 1803 Napoleon had become dictator and in May that year, Great Britain and France were at war.  The fear was to have a French military and naval settlement at the belly of Port Jackson.  Hence, the urgency to settle VDL.

Chosen for the job, was a young Devon man, by the name of John Bowen.  Bowen came from a distinguished naval family, son of Rear-Admiral James Bowen and brother to George and nephew to Richard, who served as naval officers.
The site had previously been selected and Bowen was under orders from Governor King in Sydney to sail for Risdon Cove, which was named after William Bellamy Risdon, second officer of the ship Duke of Clarence. Risdon served under Lt. John Hayes, who had mapped the area of Risdon Cove and river as early as 1793. 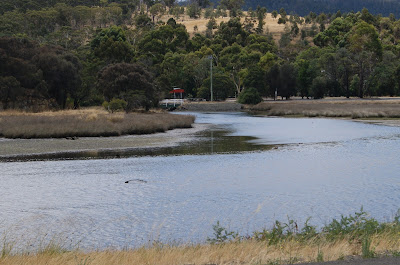 Two vessels set sail for Risdon Cove, the Albion and Lady Nelson.  The Lady Nelson arrived ahead of the Albion, aboard on which was Lt. Bowen.  On 12th September 1803 he anchored at Risdon Cove.  On October 7, 1803 Governor King was able to write:  “I have this instant heard that Lt. Bowen has landed safely at Risdon Cove in the River Derwent on Van Diemen’s Land. He speaks in high terms of the beneficial settlement.”
While the site was a good one from a defensive point of view, against intrusion of the French and possible attacks by the local Aborigines, it proved far from being “beneficial” in that the soil was poor and water scarce.
Nonetheless, being a very energetic young man, Bowen was busy from the start.  With reluctant convicts and marines, he had the responsibility of organising the colony so that it would eventually survive and hopefully, prosper.  With him was his lover, Martha Hayes, who was described by a visiting Irishman in late 1805, Joseph Holt, as the “prettiest violet that I saw growing at the Derwent.”  Eventually Martha would have two children to John,  Henrietta and later Martha Charlotte. 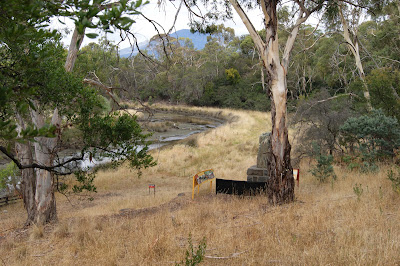 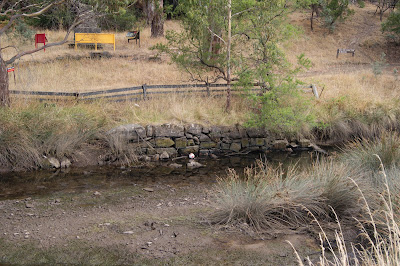 The Sydney Gazette reported October 9, 1803, “Lt. Bowen with the settlers and etc., were all landed and in good health”.  A week later the Lady Nelson had returned to Sydney with further positive reports. Yet, in reality this was not the case.  Right from the start there were personality clashes between the free settlers, with Bowen having a major problem with Lt. William Moore, who was in charge of the military.  Bowen referred to him as “a mutinous rascal”.  Bowen eventually sent him to Sydney under arrest, but King dismissed the charge and Moore returned to the colony.  Besides tying to feed everyone, Bowen had additional problems with the convicts.  Soon after arrival, one James Lewis (alias Druce Duce) together with several others, stole Dr Mountgarrett’s boat and escaped.  Despite this by the end of the year, Bowen had achieved much, including exploring the surrounding area and beyond, later exploring as far as the Huon River.  Governor King, however, was having major concerns over Bowen’s “private affairs” meaning his relationship with Martha Hayes. Partly because of this, when Bowen visited Sydney with the intention of resigning, Governor King ordered him to return to Risdon Cove, knowing full well that he had personal responsibility there. 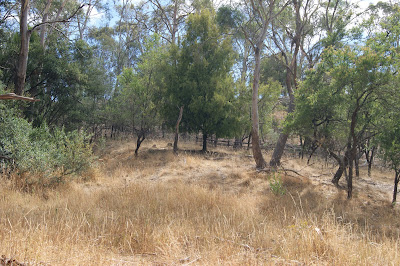 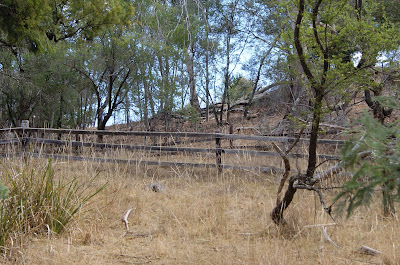 By the time Bowen returned to Risdon in March 1804 on the Integrity, David Collins had already arrived in the River Derwent. David Collins of the Royal Marines had come to also settle VDL and with authority from Governor King to head both colonies.  This Governor King had made known to Bowen. Collins arrived in the River Derwent February 11, 1804 and he inspected the Risdon Cove site four days later. He then decided to abandon the Risdon site and move the colony to Sullivan’s Cove (Hobart). 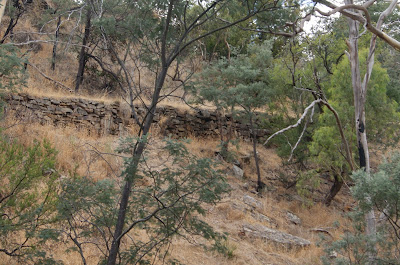 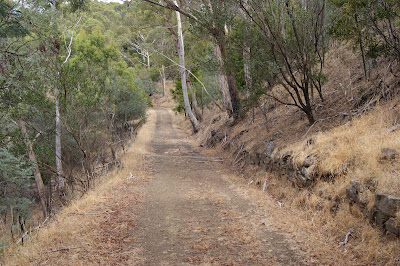 Much to Bowen’s surprise and frustration, he learnt upon arrival that Risdon Cove settlement was to be removed. Bowen refused to recognised Collins’ authority and for a time there were two settlements in southern VDL under two commanders.  It was during this period, that the first ugly confrontation with the local aborigines occurred, May 3 1804, during which a large number of aboriginals were killed. Bowen was away exploring leaving Lt. Moore in charge.  The pioneer priest, Rev Knopwood recorded the affair in his diary with information obtained from Dr Mountgarrett.  Moore gave a report to Collins, which undoubtedly would have been to his own favour.  Collins in turn reported to King about the contact stating among other things, “Not having been present myself, I must take it for granted that the measures which were pursued were unavoidable.” This incident has become known as the Risdon Cove Massacre. 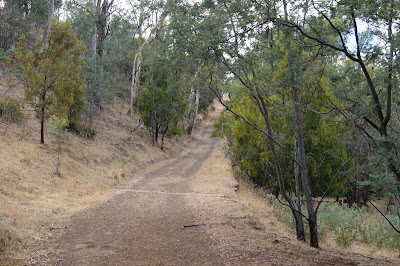 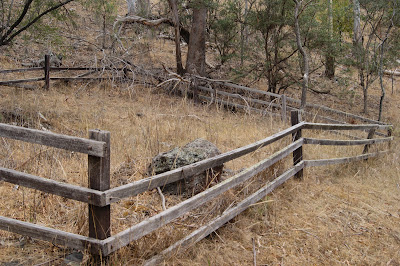 It was inevitable that Bowen surrender his credentials to Collins, especially when an irate Governor King requested that young Bowen return to Sydney at once.  Before doing so, Bowen arranged for Martha to be declared a settler, thus allowing her to obtain land grants to be supplied when possible from government stores and asked the Rev Knopwood to look after her.  Bowen in Sydney gave his resignation to King and decided to leave the colony for good.  He resumed his naval career and went on to enjoy a distinguished career. Not bad for a 23 year old. He achieved much and had a lot against him. The failure of Risdon Cove as a settlement was not Bowen’s fault. 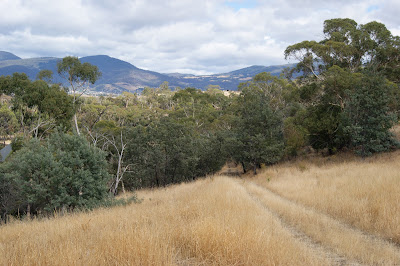 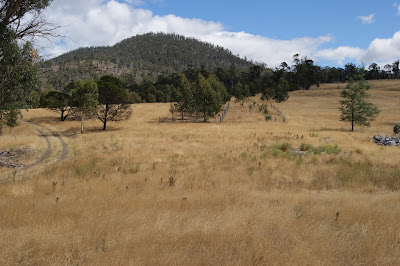 Collins abandoned the Risdon Cove settlement and John Bowen had gone forever.  His lover, Martha Hayes, took up land on the western side of the River Derwent.  She was to marry Andrew Whitehead in 1811 and have a third daughter by him. In 1812, Major Andrew Geils erected a brick dwelling, which he called Restdown.  Geils left the shores and became an absentee landlord and in 1820 Alfred Thrupp and his wife, Sarah were living there.  Then in 1825 William Lyttleton was placed in charge of Restdown and in July 1829 it was sold to Thomas Gregson.  Gregson added on to Restdown and died there in 1874.  By this time the colony was appreciating the Risdon Cove site for its historical significance and the area was developing, albeit slowly.  Other settlers had moved in, such as Thomas Birch who had taken up 300 acres at Risdon Cove and William L’Anson. A road had been built leading to Richmond and a Mr Clebourne had become neighbours to Gregson.  A halfway house named Saracen’s Head was built in 1828 for travellers going to Richmond. Rev Knopwood visited the area more than once, recording for instance that he took Divine Service in the home of Gregson (1829).
The fifty years since Bowen’s settlement (1853) was celebrated in Hobart which coincided with the cessation of convict transportation. 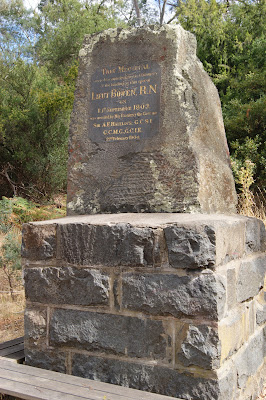 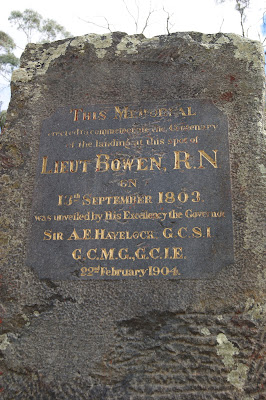 A highlight of the centenary celebrations at the site was the unveiling of an obelisk to Bowen and the settlement.  Made up of stone quarried from Proctor’s Road, it has a 5ft base square and is built of blue stone asher and the cavity is filled with cement concrete.  The obelisk stands upon this base and is in one solid piece. The contractors were Messrs. Watson Bros.  The stone bore the words, ‘
This Memorial erected to commemorate the Centenary of the landing at this spot of Lieut. Bowen. R.N., on September 1803, was unveiled by His Excellency, the Governor, Sir A.E. Havelock. G.C.S.I. G.CM.G. G.C.I.E; 22nd February 1904.
The site at Risdon Cove was farmed until 1948. By the 150th anniversary celebrations (Sept 1954) land had been acquired by the State Government to add to the reserve. The Tasmanian Aboriginal community met at Risdon Cove in 1992 determined to win back their land. In 1995, they were successful and Risdon Cove was returned to the Tasmanian Aboriginal Land Council. The Tasmanian Aboriginal Centre now administers the site. The site is also now home to an Aboriginal Community Centre and an Aboriginal Childrens Centre as well as the Bowen Monument and other historical land associated with the first white settlement in Hobart 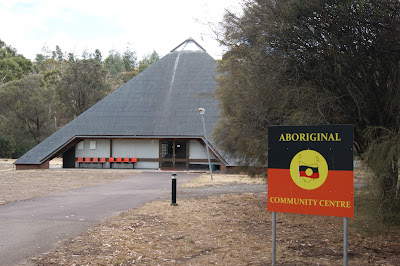 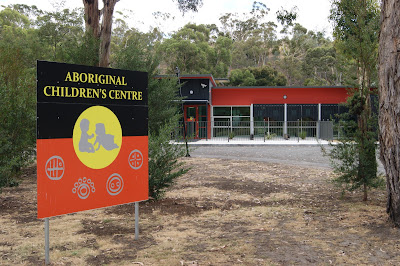 The hand-over of the Risdon Cove site, which includes the Bowen Memorial, was part of the Aboriginal Lands Bill. The transfer occurred on 11 December 1995, and the many of the historic relics have since unfortunately fallen into disrepair. Risdon Cove is still an interesting place to visit, even though in 2006, the Tasmanian Government took the unpredented step of declaring "Risdon Cove is no longer a historic site!!"
Posted by geoff ritchie at Saturday, February 09, 2013