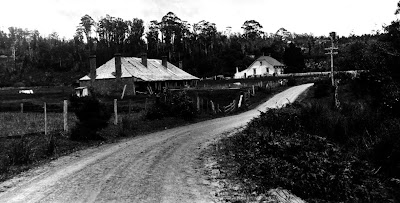 The Cascades Probation Station is unusual for, while most of the convict settlements built in the 1830’s and 1840’s as outstations for the main Port Arthur prison have fallen down, much of this site remains intact. In fact it can be said that it is now the finest example of all given its extensive restoration program of the 1980’s. 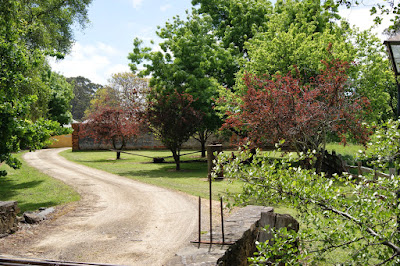 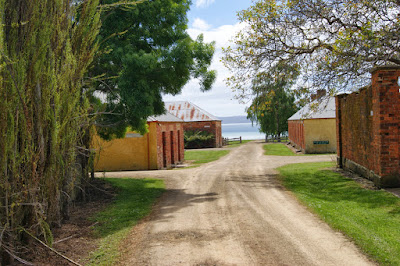 The place was originally known as Newman’s Bottom, an area of nearly 2000 acres of rich alluvial soil picturesquely perched along the southern shores of Norfolk Bay. Heavy forests lined the bays and the rocky outcrops along the waters edge provided an abundance of native oysters for soldiers who passed through the area with their convict work gangs. 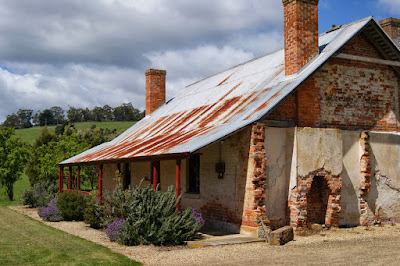 In the early 1840’s, some 10 years after the establishment of Port Arthur, it was decided to build a number of out-stations around the Tasman Peninsula to take advantage of the high quality timbers and soils of the area.
Newman’s Bottom was an obvious site because it had a good stream of water throughout the year and by September 1843, a team of more than 200 convicts were clearing the land near a small waterfall not far from the bay. It became known as Cascades. 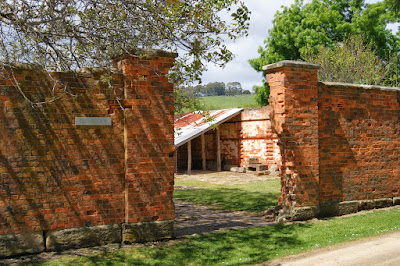 The first buildings at Cascades were of wood and bark construction and just three months after the first buildings were completed, the Lieut. Governor of the colony approved the construction of the superintendants quarters at a cost of about $70 in today’s money. Within two years, a report was sent to the administration in Hobart Town showing that land had been cleared for farming, prisoners barracks were under construction, timber was being sawn and that a military barracks was planned. The once sleepy little bay was now a busy settlement of nearly 400 men. 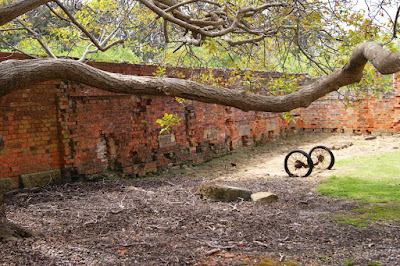 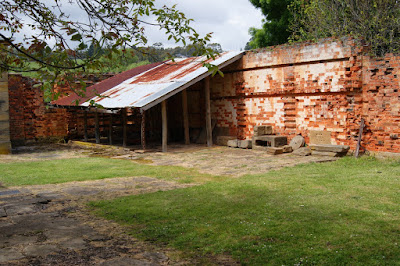 Planning and building continued at a steady pace. Nine solitary cells with adjoining exercise yards, similar to those at Pentonville prison in England, were being built for miscreant convicts. A chapel for 300 was required. A new mess hall would hold 200 men and workshops were constructed.
Not far away from the settlement the prisoners put down a trial shaft to see if any copper ore might be found. This was unsuccessful, however quarrying for sandstone yielded good quality stone for more substantial buildings. 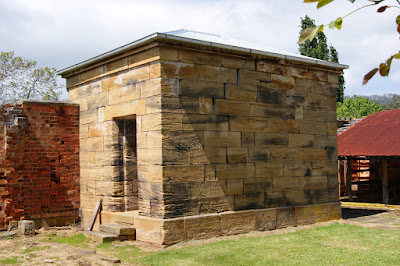 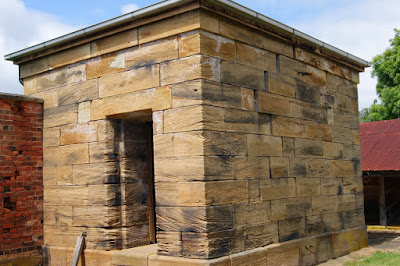 In 1847, five years after the first men arrived at Cascades, the original prisoners were removed and replaced by English convicts from Norfolk Island whose main task was “procuring timber for general purposes”. At this stage 144 “apartments” and the other buildings generally were” of a superior class” being mainly constructed of brick and stone rather than wood. For the next few years Cascades continued as a timber station supplying boards for the floors of Port Arthur and other woods for Hobart Town, just a few days sailing time away. Grain crops and other foods were produced. 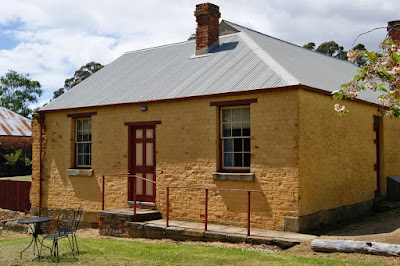 For the prisoners however, life was tough being locked up at night and toiling by day in damp and leech ridden gullies. By any standards Cascades, despite its idyllic setting overlooking Norfolk Bay, was not a pleasant place and nor were the occupants of its numerous buildings the most pleasant of men. They were there for a purpose and the niceties of life were not part of this isolated and disciplined existence. 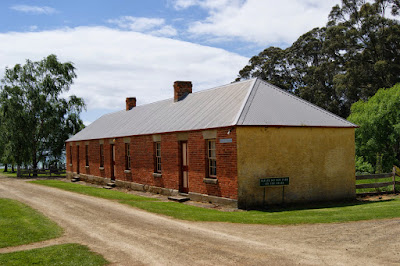 By 1853, political pressure led to the cessation of transportation of convicts from Britain and as sentences were completed, the number of convicts in Van Diemen’s Land diminished. Not long after this event, a little more than a decade after it had been founded, Cascades was abandoned. An 1857 report suggested that the “recently vacated station” should be converted to a rifle range but there is no evidence that this was done. 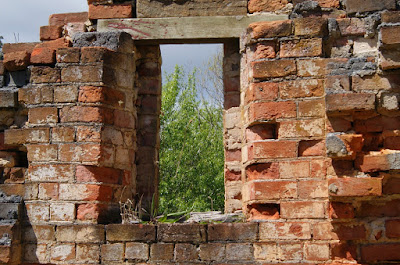 However, the local signal station, one of many situated at key points around the peninsula to send semaphore signals to Hobart Town & Port Arthur appears to have remained manned throughout this period.
By 1860 the buildings had fallen into disrepair and the previously cleared farm land once again taken over by native scrub and trees. 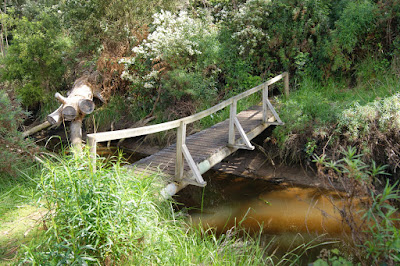 In 1862, Cascades was given a new lease of life when it was decided that the area would be suitable for sheep and cattle grazing, the buildings being considered first rate for that purpose. By 1863, it was functioning as a farm with nine men in residence and between 1867 and 1870, a number of crops including potatoes, carrots and turnips and well as meat products were being produced. 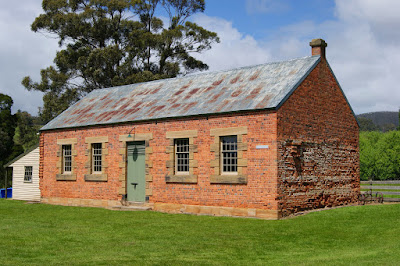 However, the farm hand mad no attempt to maintain the buildings and by 1873, only one row of building was still in good repair. This was near the end of the convict system and many of the prisoners were becoming old. It was difficult to keep up the maintenance on the main prison settlement at Port Arthur as well and to most people it was apparent that Tasman Peninsula, isolated as a prison for nearly half a century would soon be opened up for private settlement. 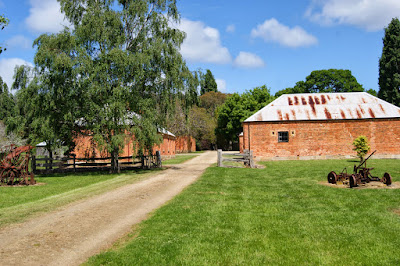 Thus the first private owner of cascades became Henry Chesterman who received a crown purchase grant in 1882. In 1915 Belmont Moses Clark, grandfather of the current owners, bought the property. Much of the land during the 20th century was used for orcharding and dairying. One of the first cool stores in Tasmania was built on an old convict building around 1930. 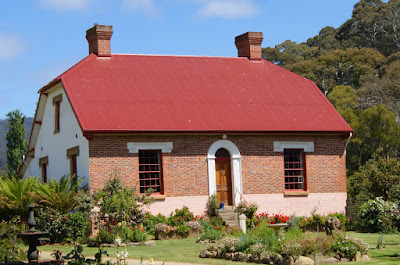 The property has been passed down through subsequent generations and in 1982, after extensive renovations, Cascades was opened up for colonial accommodation by Donald & Sue Clark. Following the family tradition, the accommodation is now operated by their son Marcus Clark & Maria Stupka. 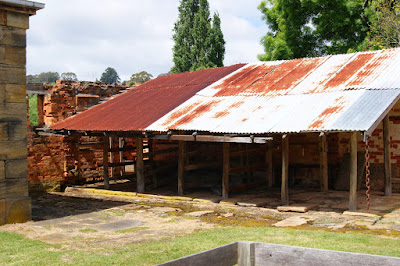 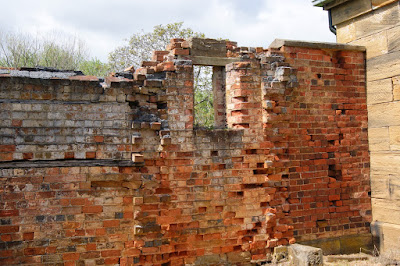 Restorations have continued into the 2000’s and the site is in wonderful condition without losing the feel of its original intention. A great place to visit and walk around and if you have the time, check out the colonial accommodations.


Main Information Source:
Cascades Colonial Accomodation Booklet (Available at the main office)
Thank you to Maria for allowing me to wander the ground for photos and for access to some of the buildings